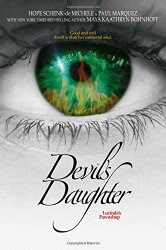 “Hope Schenk-de Michele and Paul Marquez have been best friends for more than four decades. They both grew up in Los Angeles, California, and share a passion for mystery and science fiction. This passion led them to create the forever young and beautiful daughter of darkness, Lucinda… To assist in bringing Lucinda's story into the literary world, Hope and Paul enlisted the help of Maya Kaathryn Bohnhoff as a collaborator… All three authors reside in California: Marquez in West Hollywood, Schenk-de Michele in Toluca Lake with her husband of twenty-two years, and Bohnhoff with her family in San Jose.”

Or, if you dare, check-out Lucinda’s Pawn Shop on Facebook. *Mwahahahaha*

Maya Kaathryn Bohnhoff: “Maya became addicted to science fiction when her dad let her stay up late to watch The Day the Earth Stood Still. Mom was horrified. Dad was unrepentant. Maya slept with a night-light in her room until she was 15… Maya lives in San Jose where she writes, performs, and records original and parody ) music with her husband and awesome musician and music producer, Chef Jeff Vader, All-Powerful God of Biscuits… To top it off, they've also produced three musical children: Alex, Avery, and Amanda.”

To learn more about Ms. Bohnoff and her many works be sure to check outher website.

“Lucinda is as old as humanity itself, yet perpetually young, beautiful, and endowed with supernatural powers. She lives a double life—human and immortal. In her human guise, she manages Lucinda’s Pawnshop & Antiquary, the doors of which can open to any street anywhere in the world at any time. Mortals who have arrived at a moral or spiritual crossroads are drawn into the mysterious shop. If they acquire one of its cursed artifacts, they may find themselves drafted into Lucifer’s service.

Born out of a betrayal of trust between the first woman, Eve, and father Lucifer, Lucinda has worked covertly and subtly for millennia to be true to her mother’s love by subverting her father’s schemes. She wins freedom for some; Lucifer keeps those who fail for eternity. She has to be careful, for Lucifer has placed her under the watchful eye of the fallen angel Nathaniel, whose real intentions are a mystery to her.”

You can get the jest of the story from the blurb. That is the tip of the iceberg. There are at least six story arcs going on in this book. I want to count Nathaniel as a story arc also though, he intrigues me the most of the fallen angels, and adding his would make seven. So, we have the basic good versus evil plot with the twist of Lucinda (Lucifer and Eve’s daughter) thrown in the middle. Lucifer kidnapped Mariel when she was five-years-old and brought her into his realm of the Between, renamed her Lucinda, raised her with his influences and watched her grow into her powers. The struggle within her is real and she must be careful subverting Lucifer’s goal to start the end of times, Armageddon.

Lucinda must also try to piece together how all the story elements fit together. Lucifer does not reveal his game, and it is a game to him. We have lawyers dealing with insider trading and funding terrorist groups in the Middle East. Covert military missions manipulating religious factions, precious antiquities that affect their owners thinking processes. A handsome and devout journalist who is handed the story of a lifetime. Witches, demons, fallen angels, religious cult fanatics, and a love story. All of these components are expertly woven into Lucifer’s grand scheme.

With all of this going on around her, Lucinda experiences a human emotion she has never felt in all the millennia she has been alive. The awakening passions concern the human journalist, Dominic Amado. She knows she should walk away for his own souls safety, peace, sanity... She just can’t. I couldn’t help but love Lucinda. She has a strong spirit, and she’s level-headed, intelligent, and can be as devious as her father. It’s going to be interesting to see how she tries to make this relationship work with Dominic, who also has a strong character and a bit of darkness in his own soul. However, he is working hard to redeem himself.

The plot has a nice pace considering all the elements incorporated into the story. It also takes place all over the globe. Distance is not a problem for Lucifer and his ilk, they just pass through the between to be anywhere or anytime they wish to be in the blink of an eye. However, not all demons have this ability. This turned out to be a unique read and I hope to continue the series. I have great hopes for Lucinda and Dominic if she can keep him alive. Lucifer is not a threat to him, but there are a couple other factors that may be. Also, as I said at the beginning, I look forward to learning more about Nathaniel, I think his role will become more involved as the story develops.

There were no F-bombs dropped, and sex was behind closed doors, which really disappointed me but didn’t warrant dropping a star for.

Devil's Daughter: Lucinda's Pawnshop is book 1 of a series. This first book does not end in a cliff-hanger but some story arcs are unfinished, in a not too suspenseful way, to hopefully continue in the next book.