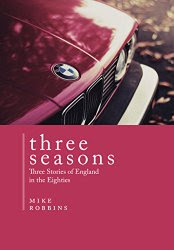 Mike Robbins is the author of two books of travel memoirs, a novel, and a scientific book on climate change. He has been a journalist, traveler, development worker and climate-change researcher.

Born in England in 1957, he graduated in 1979 and worked in rock-music publishing, financial journalism, as a traffic broadcaster and as a reporter on the fishing industry.

In 1987 he went to work as a volunteer in Sudan, an experience he described in his book Even the Dead are Coming (2009). He later worked as a volunteer in Bhutan and went on to live in Aleppo, Brussels and Rome. Three Seasons: Three Stories of England in the Eighties, was published at the end of 2014. He expects to complete a second novel in 2015.

Three Seasons is a book of three novellas, unconnected with each other, but all set in the south of England in the 1980s.

In Spring, a middle-aged Hull trawler skipper, his great days gone, has one last throw of the dice a South Coast port.

In Summer, an ambitious young man makes his way in the booming Thames Valley property market, unconcerned with the damage he does to others.

In Autumn, the Master of an Oxford college welcomes his two sons home, but they awake difficult memories from half a century before.

I found the writing in these novellas engaging and descriptive, and yet not so contrived as to leave long descriptive passages. I was never inclined to skip sections, which is my crude gauge for the readability of literary fiction.

The author’s journalistic background shone through as each story included detailed subject background, some relating to the era—the 80s—but mostly as a vehicle to delve deeper into the plots and characters. I found the information interesting and informative but never overpowering.

I enjoyed each story for different reasons, and there truly is no connection between them. This made for three enjoyable reads, although I felt a bit short-changed by the ending of the second tale.

If you enjoy a writer who takes the time to word-paint the weather and the physical scenes and characters, I think you’ll enjoy these stories. I did.