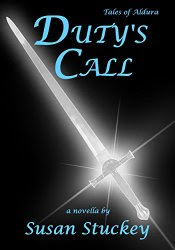 Susan is a proud mother of an active duty soldier.

Because, as her son tells her, she is ‘older than dirt’, her photos are in albums on shelves–not digital. (She knows she is way behind the times.)”

To learn more about Ms. Stuckey, please visit her website or herFacebook page.

“Jatham Draben follows his dream of becoming a Stormhawk Ranger. On his first mission he discovers a plot by a Chorkan he calls Red. This enemy of the Kalieri people plans to overthrow the current King of Klatinan and place an agent of the Chorkan in power. As he trails the Chorkan, Jatham discovers additional schemes. Will he be able to stop Red?”

Jatham is the youngest son of Rurik Darben, a retired Stormhawk commander whose four other sons all became Stormhawks. He is on his first mission as a Stormhawk and knows he has a lot to live up to. Commander Kendrick knows there is a rumored plot against King Vernon in the Kingdom Klatinan, but Rangers have had no luck in learning details. Jatham and Marcus, Jatham’s oldest brother, have been shadowing six Tevari mercenaries up a hillside where the mercenaries end up meeting with several Klatinan nobles, a Chorkan Shaman, a Chorkan with red hair, and several black-cloaked, hooded men. All of them speak in a merchant-created trade tongue. Of course things don’t work out smoothly for Jatham.

Jatham is determined to find out the whole plan. Commander Kendrick pairs Jatham with an experienced Stormhawk Ranger Bernard, who is also a Healer, to learn what they can. Having to contend with unseasonable winter weather, the two head out in the direction Red was last seen. With some luck they learn one of the puzzle pieces from a tavern keeper in Wishwood. There are several twists as the widespread conspiracy slowly unfolds. However, Jatham is still left trying to put the strange pieces together and every step forward seems to bring two steps to the side. The Chorkan have devised an ingenious plan full of traitors. Jatham seems to have a tactical mind and comes up with a plan to counter the Chorkan. But can he pull it off? Several factors have to fall into place for this to work. Failure could cause war and the loss of the Kingdom of Klatinan.

Duty’s Call is set in a period generations after all the previous Tales of Aldura.

No issues to speak of with editing or formatting.

Email ThisBlogThis!Share to TwitterShare to FacebookShare to Pinterest
Labels: 5 Star, Fantasy, fiction, YA

What a lovely surprise on the day before Labor Day! Thank you ever so much for reading and reviewing.

Excellent review. I've read most of Susan's work and they are all excellent.

Thanks for dropping in and commenting, Ms. Stuckey. I love the whole Aldera series, they have all been creative, magical, and unique.

Thank you Kerry Donovan, I have enjoyed this series immensely and always look forward to the sequels.