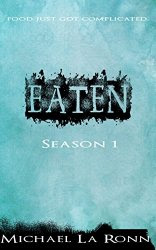 When he recovered from a deadly sickness in 2012, Michael La Ronn realized the shortness of life. So he decided to pursue his passion—writing. Today he writes quirky science fiction and fantasy novels about vegetables and androids, short stories, and poetry. The author lives with his wife in Des Moines, Iowa.

Kendall Barnes is one of the human citizens of the Middle Rind of New Eaton. His city is unique for it is comprised of cereal boxes and soda bottle skyscrapers. On its streets are other people as well as “candy bars, boxed dinners, doughnuts, and other processed foods each with bright packaging and droopy eyes, adding artificial color to the area.”

In Kendall’s world most of humanity is obese and the underclass are the vegetables. The Gourmans, the ruling class, keep the humans happy with plenty of junk food and inactivity.

Kendall intends on entering the Festival of the Harvest to be held in Nonpareil Square. All he has to do is slash and gash the most free-running vegetables with his knife and fork weapons. He could win Nutrizeen injections that would shed his unwanted pounds leaving him fit with a god-like body.

Fry Guards bring in the prisoners—a fresh group of veggies harvested from the battlefield. (New Eaton is at war with the vegetable kingdom.) The vegetables are led off of a jail ship connected by chains. When set free to be attacked by the likes of Kendall Barnes, a few prisoners fight back. They are led by Brocco (a brave broccoli) Celerity (a stick of celery you wouldn’t want to mess with), and Frank, (an odious onion).

Thus Michael La Ronn begins his satirical novel, Eaten: The Complete First Season. The author does an amazing job of showing the depth of hatred between the Gourmans and the vegetables. The Gourman leader, Sodius, is a cloud of salt making Adolph Hitler look like a pacifist.

Sodius is contrasted by Carrodias, a carrot, who is the vegetable king. He’s a courageous vegetable willing to risk his life for peace between the two kingdoms.

La Ronn provides his readers with a non-stop joyride in a plot filled with unexpected twists and turns as the vegetable “terrorists” stop at nothing to end Sodius’ reign of genocidal terror against the vegetables. In so doing, La Ronn explores the folly of racial hatreds and the stupidity of war.

Readers beware: Eaten: The Complete First Season leads into other volumes so the plot is not resolved.