Note from BigAl: Two and a half years ago ?wazithinkin reviewed this book shortly after it was self-published. The review was mixed. Since then the book was picked up by a small press and went through a "major facelift" and another round of editing. The author asked if we would be willing to read and review the new version. ?wazithinkin (who is much nicer than I am) agreed. :) 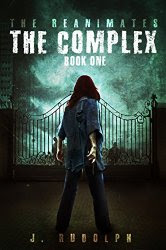 “J. Rudolph is the author of the zombie series The Reanimates, and the young adult paranormal mystery, Hadley's Haunting. Born in 1977, she resides in Southern California with her husband, son, two turtles (who she claims own all rights to her house and allow the people to live there, since only they can open the food jars) and her maniacal bird (who seems to have developed a taste for flesh in its lifetime). As a nurse with over fifteen years of experience, she often incorporates an element of medical training in her stories, offering authenticity to her medically minded characters. She also offers authenticity to her zombie series--she calls herself a living dead girl ever since her spinal reconstruction in 2014.”

“Cali Anglin, RN, had a great life. It may have been nothing special to the rest of the world, but she loved it.

That was on a Wednesday.

By Friday, it was gone forever.

With the government gone, electricity extinguished, and the food supply dwindling, she has to face questions she’s never asked herself before–just how far would she go to save her family, her friends and her rapidly collapsing community? Would she kill for them? Would she die for them?

She’s about to find out.”

I first read and reviewed this book for BigAl’s Books and Pals in January 2013. I gave it three-stars back then. Ms. Rudolph has since gained a small publisher Winlock Press, an imprint of Permuted Press, and asked if I would re-read The Complex. If you read the original review you will see I had some story-line problems, so I was interested to see how the book had or hadn’t changed.

When a devastating virus, which causes it victims to reanimate after death, hits the U.S. people everywhere start to panic. The Complex is about a small gated apartment complex in southern California and how they deal with the situation. Several families pack their things up as fast as they can and leave. A few families or residents of this complex decide to stay and ride it out for as long as they can. The characters are strongly developed and diverse, each having their own strengths. They quickly fortify their complex to keep the zombies out and gather food, tools, weapons, ammo, and medicines they need to sustain and protect themselves. Things are working out well for them as each challenge is met and dealt with. At least until a band of marauders discover them and their safe haven.

What I enjoyed the most about this story were the relationships this small community developed working together to survive. They became family. The way the story is set up now grabs you and draws you into the story with a peek of what is to come. The first chapter walks the reader through how the virus began and we see how it is mutating and spreading out of control. This story is told through the eyes of Cali Anglin, a nurse, a wife, and a mother of a ten year-old son, Drew. She and her husband Trent had always joked about a zombie apocalypse; it was a game they played, ‘what if’. It was never supposed to be real.

The Complex is an interesting post-apocalyptic story with characters I found it easy to feel a connection with. The dialogue is realistic and convincing. The plot moves at a smooth pace with some realistic twists, which could happen. When the marauders come we learn humans are far more dangerous than the zombies could ever be. If you enjoy zombie stories I think you would enjoy this one.

The Complex is book 1 of The Reanimates. There are three books in the series so far. Book 2, The Highway, will be released soon and book 3, The Escape, is scheduled for release later this year.

There are three F-bombs dropped along with graphic blood and gore.

I found no significant errors in editing or formatting.

Excellent review, ?wazithinkin. It's amazing what a "major facelift" – to use BigAl's words – can do for a book.

Thanks for commenting, Vicki. I wouldn't expect this to happen often. I kinda had to plead and make promises to make it happen. :D