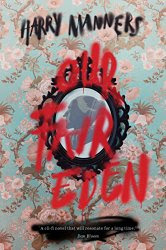 “Harry Manners is a British author of science fiction and fantasy. His work revolves around themes of isolation and destiny, the power inside, and good old-fashioned battles between good and evil.

When he's not writing, he spends his days as a science student, reads everything he can get his hands on, and occasionally chats about science on the radio.”

“It’s 2087, and the Earth’s climate is in wild fluctuation. The Amazon Basin is a sun-baked graveyard, the Gobi is blossoming into tropical beauty, and Manhattan is a swamp of the risen Atlantic. Old paradises are becoming new wasteland, old wasteland a new breed of paradise.

Nowhere is safe. Millions flee the world’s cities. But where do they run to?
The UN has an answer: the Eden Projects, colonies drawn from all nations, leading the charge in developing new technologies to help start over.”

I enjoy dystopian fiction—and isn’t there a lot of it about—coincidence? I think not. But often these novels take place when the “new order” has already been established. Our Fair Eden’s main character—Desh—is dropped into the middle of an Eden Project, which gives us a chance to see the social constructs and technology through the eyes of a newcomer—that seemed like a nice slant on an interesting premise.

Sadly, though, for this reader, the characters and the system of government in the project never seemed plausible or likely. Unable to suspend disbelief, I struggled to really care about the main character, or to believe in the political systems or the technology. Many concepts presented were interesting—such as implications of chemical control of the population and cloning. But they were grazed over and never really developed, which gave the story a rushed feel with unsatisfactory or unlikely outcomes to the main scenes and to the story itself.

The writing was easy on the eye, and the copy was clean and well edited. The story just didn’t work for me.

Rating: *** Three stars
Posted by BooksAndPals at 8:00 AM