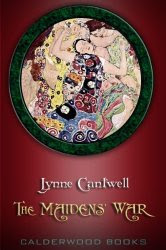 “Lynne Cantwell is a contributing author at Indies Unlimited where she shares her knowledge about Indie publishing and promotion. She has a master’s degree in fiction writing from Johns Hopkins University and is a former broadcast journalist who has written for CNN and Mutual/NBC Radio News, among other places. Ms. Cantwell currently lives near Washington, DC.

“Maggie, fighting to escape her abusive upbringing in West Virginia's coal country, has built a new life for herself at college: new ideas, new friends, and maybe a normal boyfriend. Then her professor introduces her to the Czech myth of ‘The Girls' War,’ and hires her to help build a society of strong women like the one in the story. But Maggie's father will stop at nothing to get his hands on his daughter again. Distraught, Maggie cries out for help - and against all odds, a Slavic goddess responds by sending her an unlikely champion.”

Interesting story, a timeless tale, will the power struggle between women and men ever be on equal ground? Which is stronger, a matriarchy or a patriarchal society?

Maggie’s professor in her Introductory Women’s Studies class, Dr. Kohout, dreams of building a community for women. But first she has to motivate students to want to make a change in defining women’s place in America and in the world today.

The story switches back and forth between time settings. Sarka and Vlasta’s story from the Czech myth over a thousand years ago, to Maggie and Dr. Khout’s story during the 1980s in Huntington, West Virginia. I like the way the story elements were woven together through the two different time periods. It made it easy to see the parallels in the characters between the two different stories. Dr. Khout was obsessed about the old Czech folk tale of The Maidens’ War. She had dreams of visiting Prague, perhaps even living there. In the meantime she is trying to teach her students how to empower themselves using myths about strong women. She envisions constructing a society for women.

I think that women bond differently than men. Dr. Kohout seemed to be realizing this towards the end of the story. I got the feeling throughout the story that she was a closet lesbian who couldn’t face that fact, but I didn’t have that same feeling at the end of the story. I could see her organizing an abused women’s shelter though. I think it is strange that I am not worried about Maggie and her history or future, I think she will be fine. But Dr. Kohout, I am worried about. Her story-thread takes a turn and seems unresolved. I have a lot of thoughts right now running through my head about this story. It will be a while before they rest.

This story deals with incest and sexuality.

I found no significant issues with editing or formatting.