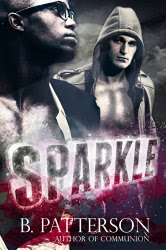 “Brandon (Patterson) is a graduate of North Carolina State University where he majored in Psychology and minored in Japanese. He currently lives in Southern Maryland… Communion is his first published novel… Brandon’s values as a writer include: writing high-quality books, diversity, integrity, and entertainment.”

To learn more you can visit his Goodreads page.

“Tedward Culling hates everything, but particularly: geometry (the one class keeping him from graduating), Genicelle Eaglin (the high school girl with an obsessive crush on him), and Jesper (his homicidal older brother who also happens to be the world's top assassin). With Jesper now in town and on the prowl, Tedward is asked by the vampire elite to create an army of day-walking vampires called Sparklers in exchange for a passing grade in geometry. Can Tedward finally stand up to his older brother and save the town?”

I picked this up because I wanted to see what B. Patterson did with his sparkly vampires. Truth be told I did read all of the Twilight books, my granddaughter insisted, I thought they were “Meh”. Anyway, Tedward Culling being a high school student, having a groupie fan girl, and his sparkle is about all this book had in common with Twilight. Poor Tedwad is twenty-seven years old and can’t seem to grasp Geometry. He has to pass this class to become an assassin. Luckily he has Genicelle to tutor him this year however, she is very obsessive and insists she wants to become a vampire.

The story is told through Tedward using first person present point-of-view. Except for the Prologue, which is told through Jesper, who is one nasty vampire. Jesper has come to town looking for Tedward to eliminate him as well as other vampires he comes across. The Keepers of the Night are the traditional older vampires, whose dead bodies are animated through magic. They have to avoid the sun, crosses, holy water, and silver. This is not so with the Sparklers, the day-walking vampires.

The plot is evenly paced as we learn about Malcolm, a nerdy black student, who is having trouble with bullies and Genicelle with her ever present infatuation with Teddy. Then we meet The Keepers of the Night who wish to hire Tedward to kill Jesper for them. B. Patterson is able to tell a unique story with lots of humor without going over the top. I found it interesting and entertaining while still being able to keep its overall integrity. This is a fun light read that does carry a message.

There were two F-bombs. The gay/lesbian factor was soft.