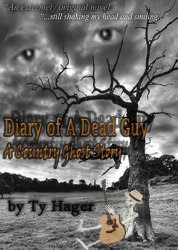 “As a singer/songwriter, Ty Hager's humorous songs have been heard on Dr. Demento, and Bob and Tom, as well as on XM Radio. As a radio broadcaster, he's hosted morning shows in several markets, and his syndicated country music interview program, Behind the Hits, aired for thirteen weeks during the summer of 2011 on the American Forces Radio Network. He turned those complete interviews into Nashville Songsmiths - In-Depth Interviews with #1 Country Songwriters. He's also been a professional stand-up comic, and has written two screenplays, numerous short stories, and his name in the snow. Many times.

Diary of a Dead Guy is his first novel. It's about freakin' time.”

“Harvey Boyd is a small-town radio newsman who thinks the biggest story of his career is the murder trial of Angel Whaley, accused of offing her husband – rising country star Jared Whaley – in his dressing room before a show at a local nightclub.

He has no idea.

Following a field trip to the station by a group of sixth-graders, Harvey finds a suspicious document uploaded to his laptop. It had to have been put there by that quiet kid who’d slipped away from the tour and been caught at the computer, yet there’s no way this twelve-year-old redneck could have written the words. They tell the story of a middle-aged country singer, murdered just as his career was taking off. It’s written with intelligence and humor. It’s written in the first-person. It’s written in the past tense.

Harvey’s about to become a part of the biggest story of his career.

Diary of a Dead Guy is part ghost story, part outrageous comedy, and part whimsical-yet-sobering look at some of the harsh realities of the country music business. Alternating between the first-person memoirs of the suddenly-deceased Jared and the narrative tale of a small town turned upside-down, it describes what can happen when the unfathomable thrusts itself upon the innocent, leaving no other option than to believe.”

I picked this book up because I had a reading hangover, I needed something really different to shake me out of my slump. This book did it in spades. Jared Whaley was a country songwriter and singer that had a lot of irrepressible charm. On the downside he was also belligerent and obstinate. I don’t know anything about the country music business but everything related in the story sounded honest, realistic, and absolutely believable. This helped lend to the authenticity of that part of the story. Harvey Boyd’s character, the small town radio newsman, also carried the same credibility. As well as the ego of the high-powered lawyer, Marshall Laughlin, hired by Angel’s wealthy father to represent her in her defense for the murder of Jared Whaley.

Willard Blevins, a twelve-year-old with a new laptop, inexplicably starts channeling Jared’s spirit. Jared wants his story told from the very beginning, and he has chosen poor Willard to type out his story. Ty Hager, the author, often breaks the fourth wall in the story, which is told from different points of view in alternating chapters. I found it engaging and entertaining as we learn more about Jared’s life story. There are laugh-out-loud scenes as well as suspenseful, emotional, and heartbreaking scenes, with twists and turn of events that could not be foreseen. Diary of a Dead Guy has the whole gambit, adventure, sex, drugs, comedy, country music, and rock and roll, from Oklahoma, to Texas, to Tennessee and back again. It was a joyful ride most of the time that I couldn’t wait to get back to in the evening. I sure enjoyed it.

However there is one thing I have to mention. I found an inconsistency in Chapter 26 where Mack, Willard’s father, was silenced by a sharp look from Harvey. When on the page before Harvey had left the judge’s chamber to follow Angel after she ran from the room to the lady’s room. It was a minor inconsistency that didn’t really impact the story-line and since the rest of the editing was good I am not going to take away a star. This is a creative, unique, and entertaining tale that deserves five stars. I will happily read anything else written by Ty Hager.

Lots of swearing and F-bombs. There is also some sexual content that may not be suitable for some readers.

Nothing to speak of except what I mentioned above in my review.