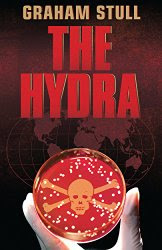 With roots between Ireland and Boston, Graham has spent a life swinging across the Atlantic, gradually becoming more and more European in his thinking. He has worked as a real estate agent in Boston; a postman in Cologne, Germany; and a Law Searcher in Dublin, before completing his training in economics and settling into international public policy. Along the way he's picked up three foreign languages, a jellyfish phobia and a love of Scrabble. His short plays have been published and performed on multiple stages in Ireland. The Hydra is the first of his series of political thrillers.

A viral pandemic has spread worldwide and stricken billions of people making them infertile. A natural disaster? No. This is a man-made tragedy, because the virus was developed in a laboratory, and Brian Matterosi, its creator, believes himself to be a hero for saving an overpopulated world from spiraling into wars and famine and regressing into the dark ages.

On occasions, I stumble across a novel in Big Al’s long list that really stands out. The Hydra qualifies on many levels.

Firstly, the premise is current and real. With seven billion humans forecast to rise to eleven billion, overpopulation is, and will be, a major contributing factor to many of the world’s problems. To his credit, the author doesn’t preach an agenda. Rather, he offers up potential future scenarios that allow the reader to consider and examine the challenges facing the modern human multitudes.

But this is far from a dry techno-thriller. Mr. Stull unfolds his plot through the actions of a number of compelling, and wonderfully flawed characters. The human aspects of the story made it more believable and kept me enthralled from page one until THE END.

The tale is told from two perspectives: One set in the near future where Brian is on public trial for mass murder--a crime for which he faces the death penalty. The courtroom provides a perfect vehicle to illustrate the pros and cons of Brian’s act. And a second thread that tracks Brian’s life and examines his upbringing as he develops from an isolated child with extraordinary mental capabilities into a genius, specializing in biology. As the two threads draw closer in time, we get a fuller picture of the reasons for Brian’s acts.

If you enjoy fiction with a political and/or scientific basis, I think you’ll have a lot of fun with The Hydra, and I suspect it’ll make you think deeply. It certainly had that effect on me, and isn’t that what we all want from good fiction?