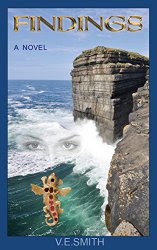 “V. E. Smith is a retired marine scientist living in Boulder, Colorado. He received a Ph.D. at Scripps Institution of Oceanography. Following that, he served as a captain in the U.S. Army in Korea. For most of his professional career he worked on the Great Lakes as an environmental researcher and consultant. The Smiths have two children with their own families in Boulder and Madrid, Spain.”

A Vietnam veteran recovering from war wounds takes leave to look for his grandmother’s sister in Ireland. The sister was left behind as an infant when the Spanish flu pandemic tore the family apart. A chance encounter with a robber trying to steal an artifact from the sunken Girona, a galleass of the Spanish armada fleeing British ships, leads to romance and intrigue.

Findings is a picturesque cozy set in Dingle on the west coast of Ireland, and is roughly equal parts travel log, romance and mystery. The story is delightfully satisfying in the first two. Historical and technical elements, including metallurgy and gemology, are meticulously researched and for the most part unobtrusively woven into the story.

Descriptions of the region’s landscapes evoke the hardscrabble lives of early settlers and the lingering effects on the present-day character of its population. A trip to Great Blasket isle, a resourceless strip of land in a storm-plagued sea, tells that story in the extreme. Once populated by fishers, rabbit hunters and writers, the island was abandoned in 1953 as a settlement. Ruins of stone houses remain a draw for tourists today.

The humorously named hero, “Brit” who is a Yank with Irish roots, romances a local nurse. She not only initially dislikes him, but is involved with an up-and-coming Irish banker she has known for years. The romance element of the story is neatly set up with engaging characters, whose speech is rendered with just enough local nuance to sound a brogue without being overbearing.

“Your nicks are looking better,” he said, “but not your eye. How are Mrs. Clarke and her niece doing?”

Those bits alone might make the novel well worth reading, but there are structural problems with the mystery as well as the broader story. It is too long with excessive back story. There is an infatuation with a nurse who befriended Brit after his war wounds. It mirrors his current love, but it doesn’t presage anything or provide any insight into his character. It’s dropped into the story with no apparent purpose. He has a relative who was a gunrunner, which mirrors the modern day trade, but relevance to the story is specious.

There is a weapons trade in the novel tied to Irish resistance against British occupation of Northern Ireland, but it poorly relates to either the main or subplots. A contrived suspicion that Brit is somehow an agent to interfere with arms shipments is never resolved and has nothing to do with the theft of artifacts from the Girona, which is central to the story. The purpose may be to add an element of suspense, but the dangers don’t ring true.

A character introduced toward the end should lead to a tense, violent encounter, but doesn’t. The character adds little tension and is another waste of words.

There are a number of holes in the mystery, one of which is acknowledged by the author, who attempts ineffectually to explain it away: The artifact could have been purchased, but instead was stolen, because buying it might implicate its creator. A cash purchase by a third party would implicate no one. The theft in the novel, in fact, implicates the creator.

So who wanted the artifact? The penultimate chapter explains in a deus ex machina intervention that scarcely relates to any preceding events.

As for the romantic story, the last line is sweet with irony.

The reviewer is a Marine Corps veteran of Vietnam and appreciates the author’s depiction of that conflagration.

A few, but scarce