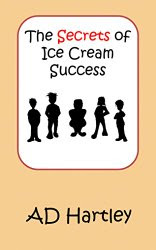 AD Hartley is a British author currently living in Kuala Lumpur. He began his career in animation and used that training in IT Finance. He has held a potpourri of jobs including a baker, website sports columnist, overseas expedition leader, and operation manager for an international youth development organization. The Secrets of Ice Cream Success, his first novel, is based on an animation script he wrote many moons ago.

Carlo Leodoni is twelve when he survives an accident that takes the life of Luigi Leodoni, his father. Now orphaned (his mom died during child birth), Carlo becomes the ward of his dad’s business partner, Randolph Fox. Two years later, when Uncle Randy is about to sell the Leodoni Ice Cream Factory to Luigi’s competitor, the odious Haverton Hill, Carlo becomes livid. Though he initially had no desire to inherit the family business, he now decides to keep his father’s legacy and re-open the factory, just so Hill can’t get his nasty hands on it.

With the help of his gang—Norton, Ben, Abi, and Newton—they assist Uncle Randy with the gargantuan job of jumpstarting a factory with deep roots in the community. Uncovering a mysterious book in his father’s study, Carlo believes its secrets could aid him in his efforts.

AD Hartley does an amazing job of creating realistic characters overcoming adversity during their summer holiday. The author has also developed a dynamic plot, which includes intrigue, suspense, villains, and perhaps a terrorist plot. All of this is done with humor and the help of a very lively ghost.

The Secrets of Ice Cream Success will attract middle grade and YA readers alike. The story’s pace is upbeat with enough twists and turns to hold the interest of its young audience.

The novel is a light-hearted coming of age tale placing ordinary kids in an extraordinary situation as they use teamwork to reach their goals.