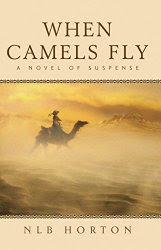 “After an award-winning detour through journalism and marketing and a graduate degree from Dallas Theological Seminary, NLB Horton returned to writing fiction. She has surveyed Israeli and Jordanian archaeological digs accompanied (twice!) by heavy artillery rounds from Syria and machine gun fire from Lebanon. Calmly tossed a tarantula from her skiff into the Amazon after training with an Incan shaman. Driven uneventfully through Rome. And consumed gallons of afternoon tea across five continents. Life is good.:

A plot to steal water in the Middle East draws the attention of an attractive hydrologist, her family and assorted clandestine agencies.

Despite the author’s impressive resume, When Camel’s Fly, fails on every level except an intriguing premise: Water theft in the Middle East. Unfortunately, the story delivers no rational scenario to carry the premise forward as the story line devolves into nonsense.

A vaguely defined group has begun transferring water from an aquifer beneath Israel and Jordan to an ill defined underground reservoir with no monitors in either Israel or Jordan noticing the loss. The group is trying to kill a hydrologist, Maggie, who, initially, seems to be the only person aware of the theft. As the story progresses, it turns out Mossad, the CIA, MI6, China, Russia, Turkey and Saudi Arabia are aware of the problem:

“Our government is tracking us, Dmitri. Apparently, we’re viral. China, Russia, Turkey, and Israel are in. Saudi Arabia and Jordan are hemming and hawing.”

Why Maggie can’t solve things simply by notifying Israeli authorities isn’t clear. She is saved from one assassination attempt by her mother, a crack shot apparently owing to her work as a “UNESCO spy.” Action escalates to a climatic assault on a heavily defended water transfer facility. Defenses include three “battle-equipped helicopters” hovering over the facility. Why they are airborne, needlessly burning fuel is not explained. A small group armed with pistols, crossbows, submachine guns and shoulder-held rocket launchers attack the facility. Maggie is shot in the chest during the assault, but fortunately is rescued by Israeli forces shortly after. Why didn’t the group wait for the Israeli army to secure the area and then do its business? The process of transferring water is slow. There is no apparent urgency.

Rather than the Israeli army, the assault is aided by “thousands” of camels, donkeys, sheep and llamas. There is no explanation of how llamas got into the mix.

Weapons wielded by the group needlessly include hand-held rail guns, heat-seeking bullets, and arrows with homing devices, all of which remain in the realm of science fiction.

There is an inexplicable reference to an Israeli-Jordanian treaty:

“I need Annex Two of the Israel/ Jordan Peace Treaty.” She searched, and read aloud. “‘ Systems on Israeli territory that supply Jordan with water … Israel’s responsibility. New systems that serve only Jordan … Jordan’s expense … to companies selected by Jordan.’” She saw we listened. “‘ Israel will guarantee easy unhindered access of personnel and equipment to such new systems for operation and maintenance.’”

The implication that the treaty leaves Israel vulnerable is intellectually dishonest. Article Four of the annex contains precisely reciprocal language for the Jordanian side. Anyone interested can easily find the document on the Internet.

Silly plots are not a death knell even for some best sellers, but the writing is equally flawed.

Words are tossed out with no regard for their meaning:

“To barrel” means to move fast.

“Maggie hoisted to the shelf…”

The author means Maggie pulled herself to the shelf. Hoisting requires a block and tackle. Those are two examples from a single page in chapter one. The novel is rife with similar errors.

“His iconic pose, enabled by flexibility earning the nickname Grasshopper, was authentic: knees to shoulders, and heels flat on the ground.”

In two words: He squatted. This is followed by a paragraph saying the individual trained to properly assume the “origami-inspired pose.” Primates, including humans, can squat naturally.

Many sentences are befuddling:

“He shook himself like a wet dog, realizing too late that splattering her with icy raindrops would not rekindle their romance.”

“Shaking my head to clear it, I dislodged the grill through which I looked.”

“My voice bobbled with each trotting step, gargling every word.”

There are numerous gaps in logic:

Maggie’s mother Grace sprained her ankle and goes from being on crutches to no crutches to running her hand along a tunnel wall as she walks again with crutches to sprinting. Then, from a stationary position, she shoots out both rear tires of a fleeing car. The author has familiarity with small arms and must know the only way that would be possible is for the car to pass once exposing one side then drive back around to expose the other.

Maggie insists she alone can reprogram the water transfer equipment to reverse the flow.

“Can you tell me how to do it?” Cliff was persistent…

“…No one can teach you undergraduate-, graduate- and post-graduate-level hydromechanics in five minutes.” Maggie turned away. “I have to go.”

Then after she was shot:

“Jeff had the presence of mind to say that the three of them finished the work she started. ‘She told us what to do right after she was hit. It was as simple as facility one.’”

There are many careless errors:

“Based on this conversations, this wasn’t the time to catch a cold, so he draped his jacket over his friend’s shoulders, tenting him in it.”

“Cleansing groundwater of salt was an almost impossible.”