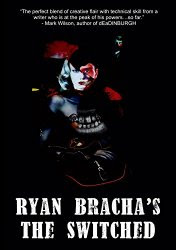 The author’s debut novel Strangers Are Just Friends You Haven’t Killed Yet took him four years to write. Since then Bracha has published five novels, including The Switched. He lives in Barnsley in the UK with his family and two cats.

One summer morning, totally unconnected people wake up as somebody else. They have their names, their lives, and their problems. Nobody knows how or why it's happened, and nobody knows if or when they'll ever get their own lives back. They must quickly learn to accept, adapt to, and in some cases embrace their new personas, if they are to survive in a world where the people known as The Switched will do anything to get their old bodies back from others who will desperately do anything to protect their true identity, and hide deep behind their new face.

Against the backdrop of a nationwide search for popular television presenter Francesca O’Reilly, whose very public breakdown and disappearance sparks chaos on social media, it quickly becomes apparent that the switching phenomenon is far more widespread than anybody could have known, and The Switched become the most famous people in the country.

Ryan Bracha doesn’t write your average novel. Not by any stretch. With the exception of the Dead Man trilogy, each work he produces is different, but yet the same. By this I mean the subject matter varies from book to book, yet each is a challenging, in your face declaration of intent which he clearly has great fun writing.

Here’s an example. Authors have a tendency to put quotes up in their blurb from other writers or readers. Ninety nine times out of a hundred they’re positive statements to persuade the casual observer to buy. Not quite so Bracha:

“The use of gratuitous swearing actually offended my eyes...”

The Switched fits perfectly into this mold. As the description says it’s the story of five people who wake up one morning to find themselves in different bodies, ones which are nothing like their original selves. Each has quirks and instabilities which lead to an increasingly bizarre series of events laced with dark humour. And a significant amount of swearing.

Don’t expect this to be your average read.

Lots and lots of swearing, including the C bomb.