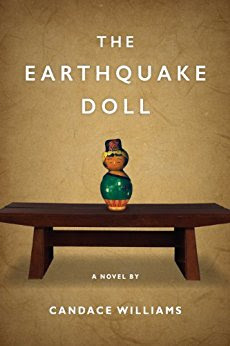 It's 1952 Japan, seven years since the war was lost to the Americans, seven years since Miyoko lost her father and the home of her birth. Now she must earn a living caring for the children of an American family at the nearby air base.

When tragedy strikes, sixteen-year-old Miyoko is ordered to obey her family's wishes or disgrace the memory of her father and bring hardship upon her family. Tradition says she must obey, but her secret heart whispers that the new laws can free her.

As the earth trembles and splits beneath her, Miyoko must jump forward—or back.”

“Candace Williams lives with her husband and beloved rescued Iggys (Italian Greyhounds) in Texas. Her first novel, The Earthquake Doll, was inspired by her early experiences in post-war Japan while her father was serving in the Korean Conflict. She is hard at work on her next book, a contemporary mystery.”

“Those who don’t remember the past are doomed to repeat it.” George Santayana – Philosopher and Poet

You’ve probably heard or seen this quote or a variation of it at some point. For me at least, when I’m reading historical fiction, in the back of my mind I’m comparing the world as it was then to now. It’s a way to “remember,” either reminding me of a time I lived through or giving me a perspective of an era, like this one, that I didn’t experience. The Earthquake Doll triggered plenty of those thoughts, mainly related to the life of the American family Miyoko works for and the aftermath of war.

However, even more interesting was the Japanese culture which at the time was going through some major upheavals with young people rebelling against tradition that no longer made sense. Miyoko is torn as she struggles with the conflict between the old and new ways and is forced to make a life changing decision between two options, each one with its price. The result is a gripping coming of age story set against a unique backdrop of time and place.

Added for Reprise Review: The Earthquake Doll was a nominee in the Contemporary/Literary/General category for B&P 2015 Readers' Choice Awards.
Original review ran March 19, 2014.

Wow - thank you very much for posting this! ::happy dancing::