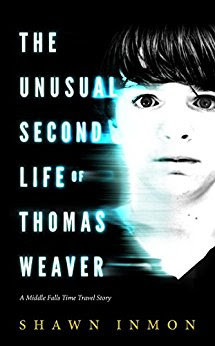 “A second chance to make it right; a second chance to screw it up again.
Tragedy is the name of the game for fifty-five-year-old Thomas. At least that's what he tells himself as he washes down the handful of little white sleeping pills stolen from his mother. Lying back on his bed, he waits for the reaper to take away the despair. Instead he is transported to a different kind of hell--puberty. Thomas wakes in his childhood bedroom, with his teenage body, and all his memories intact. With a new lease on life he has a chance to do it all right. He will save his brother, change the course of history, find love, and stop a horrific killer. That is, if he can overcome being a pathetic screw-up.”

Former DJ, business consultant, and real estate agent, Shawn Inmon is now a fulltime author. A regular contributor at Indies Unlimited, Inmon can't seem to decide whether to write fiction (Rock'n Roll Heaven), or non-fiction (his current work-in-progress is based on a trip he took a few months ago, partially chronicled at his ALap Around America website). Then there are his first two books that were novels based on truth or fictionalized memoirs or … I don't know what to call them, but they were somewhere in the middle.