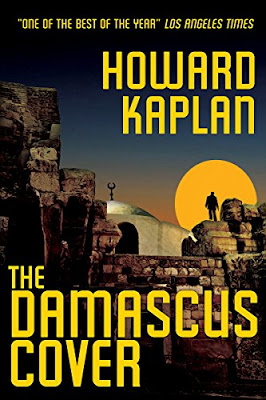 The Amazon entry describes it thus:

“In a last ditch effort to revive his career, washed out agent Ari Ben-Sion accepts a mission he never would have 30 years ago, to smuggle a group of Jewish children out of the Damascus ghetto. Or so he thinks.

In Damascus, a beautiful American photographer, Kim, seems to be falling in love with Ari, but she is asking too many questions.  His communication equipment disappears.  His contact never shows up. The operation is only hours away and everything seems awry. Desperate to succeed, Ari might risk everything.  Even his life.

In the new introduction to this edition the author tells us that in its first incarnation, in 1977, this novel sat in the lower reaches of the Los Angeles Times best seller list for 10 weeks. This reissue, self-published by Howard Kaplan in 2014, has obviously been put out to tie in with the forthcoming film, now apparently due in 2017.

Howard Kaplan doesn’t seem to have a website, although he is on Facebook and Twitter. For present purposes, perhaps the most important thing to know about him is that he has a little experience of being a spy and a lot of knowledge about the Middle East. He has lived in Israel and traveled extensively through Lebanon, Syria and Egypt. He knows the life of which he writes.

This is an excellent spy thriller. Authors are so often recommended by publishers as ‘the next John Le Carré’. None of them are, of course. And attempts at comparison simply weaken the writing of those who are not. However, Kaplan is (or was), writing gritty spy fiction which stands genuine comparison with Le Carré circa The spy who came in from the cold.

I pride myself on being able to spot a plot twist even if it is secreted in a bag of fettuccini, but this book wrong-footed me not once, not twice but thrice. I like to be wrong-footed. Nor did those cunning plot twists feel remotely strained: as soon as the unexpected occurred one could see how it was the inevitable result of what had come before. Thus the book quickly gained a sense of menace: what has Ari missed? How will it come back to bite him? The spy-protagonist is no two-dimensional cipher: the reader goes with him into the abyss created by his own character failings, spiralling down and down, as shown through the action of the book.

The settings are Cyprus, Jerusalem and Syria – economically and vividly drawn. The Middle Eastern setting are topical (despite the book’s age). Aleppo, Beirut and, of course, Damascus all figure largely and are described at a time when they were still beautiful, multi-cultural cities.

The new introduction gives some insight into what has occurred in the Middle East since 1977, but it is not really sufficient for those of us whose knowledge of Middle Eastern politics and wars since 1948 may not be deep or recent. To enjoy this fully it will repay a quick and dirty Google of the main dates and conflicts in the area (there are quite a few) so as to have at least The Six Day War and the Yom Kippur War clear in your mind. This link may be of assistance.

The prologue and final chapter comprise graphic scenes of torture.

There are a few typos which could have been put right when the text was readied for printing this time around. Or perhaps they were introduced at that point – who can say. They will not spoil your enjoyment.