Reprise Review: Will by Dan Cardinal 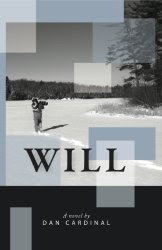 Only days ago, Will Brown’s wife and three-year-old daughter were killed in a freak road accident—both of them wiped out instantly. Soon after the funerals, living in his marital home in Midland, lower Michigan, wrecked with grief, and surrounded by in-laws, friends, and well-wishers who don’t know what the hell to say to him, Will has a brain fart and decides to run . . . to a remote cabin in Michigan’s Upper Peninsula.

Added for Reprise Review: Will was a nominee in the Contemporary/Literary/General category for B&P 2015 Readers' Choice Awards.
Original review ran April 4, 2014.

Really glad to see this because this book has been on my TBR and my Amazon wish list, probably since the time you first reviewed it. So now that my memory's refreshed, this is going to the top of the list!

Thanks for dropping in and commenting, Ms. Williams. Glad to hear the Reprise Reviews are serving their purpose well. :)

Thanks, Candice: I just reread my review, and it gave me a pleasant reminder of how much I enjoyed the novel. I think you will too.