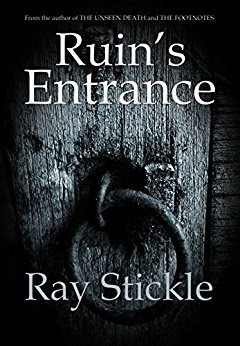 "Cast into this world after the death of his parents, young Marius Besshaven seeks the truth about his mother’s past, about his own identity. Cryptic messages in unlikely places, the fractured memories of unreliable survivors, the haunting voices of ghosts--from these elements Marius will have to piece together his family’s history. And what will become of him? Will he find ruin, like so many who came before him? Will he find resolution? Or will the curse continue?"

"Ray Stickle is the author of The Footnotes, Ruin's Wasteful Entrance, and Stay, Illusion. He graduated from Ohio State University with a degree in history. He lived and taught in South Korea for four years, returning to his home in Ohio in 2006 to finish a master's degree. He currently lives in Ohio with his wife and sons."

For more information visit the writer's Author Page on Amazon.

This is a book of several genres - gothic, family saga, mystery - all wrapped up in the story of the main character, 14 year old Marius Besshaven (terrific name). After the death of his parents, Marius is suddenly transported to an unknown uncle's house, a place of silence and secrets, some dating back to the Second World War. He has to navigate this strange world alone until he makes friends with Flora, the housekeeper's grandaughter. He meets a taciturn gardener in the grounds, Ben, who chases him away from a locked garden. And he has a tutor, Mr Charles, who seems to know something but no one will answer questions about his parents, his uncle, or his grandparents.

There is a family tree on the first page of this book which is always good to see and promises an engrossing tale. From the beginning there are echoes from the classics: The Secret Garden, Heidi, and Jane Eyre also comes to mind:

“And then there was the scream. Far distant in the house. High. Piercing. Once and then gone."

When we first meet Marius, we find him self-contained, self-possessed, holding himself at a distance from the world, concentrating on his plants and his favourite science fiction books. He has become used to looking after himself. Adults generally find him direct, almost confrontational. He didn't know his parents very well; they treated him coldly when they were alive and he felt no grief when they died. When he meets his uncle, he is afraid of him but fear doesn't keep him from pursuing the truth with courage and tenacity.

A day comes when Marius needs new shoes; Flora drives him into town and it is a shock to find the modern world continuing as normal away from his uncle's house. You forget, as you read, that the first question Marius asked when he arrived was about the internet connection:

" Leaving the estate for the first time felt strange, as if we passed a magical barrier when we turned onto the narrow lane . . . "

The writing in this book is lyrical in places and there are lines to read and read again:

And there's a wonderful library in the house extending to two floors and furnished with a ladder which the reader can see clearly, and smell too, the wood and the leather. But the reader is always aware of the darkness hanging around the house and family. There is death and spilt blood in this book, and characters with empty souls and hearts:

"The sound of the orchestra shivering its way through the walls. Enough sound to bury her initial scream? . . . and the blood spilled and saturated the carpet and filled the air with the scent of iron and the scent of the burial pits, those gaping hungry mouths . . . "

The narrative drive is so good in this book you could read it in one sitting. The characters are believable and layered and the writing is delicate and brutal where delicacy and brutality are called for.

A great story altogether and readers will be happy to know there is a second Marius Besshaven book available.