Review: Against the Oaks of Bashan by Julia Starling

Today's review is the first from a new pal, Average Jeff. 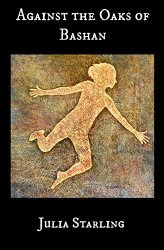 “In 1970s Buenos Aires, with the city under military occupation, people disappear at a terrifying rate. They are the desaparecidos, those who vanish forever.

Camouflaged by the ongoing crisis, someone abducts young adults for another goal. These desaparecidos are used to create a compliant, easily-manipulated population.

Lucas and Vera Freund are among those abducted. The young couple—both brilliant scientists—have stumbled onto a discovery that could change humanity forever. To shield their work from those who would abuse it, they’re willing to make the ultimate sacrifice. Years later, Frances Fons and Julian Haller meet in Zurich. They know nothing of the horrors that transpired in Argentina.”

The is Julia Starling's first book: Against the Oaks of Bashan. Starling “is a medical doctor and psychotherapist. Born and raised in Buenos Aires, Argentina, she spent five years in the UK finishing her clinical studies and then moved to California to complete her psychotherapy training. She currently lives in Northern New Mexico with her husband.”

The Oaks of Bashan opens wonderfully, with an ingrown biblical ceremony of contrition, complete with gargoyle-like incantations. It fits neatly with the book’s title, the allusion to Bashan, a terrible battleground in the Book of Genesis that remains a terrible battleground today, the Golan Heights between Syria and Israel. And, to my delight, the next chapter of the Oaks leaped across time to land among the preparations for a sulfurous lawn party. Wonderful. But just as I reached for the petit fours, I stumbled over the first of many leaf piles of impassable adjectives.

The Oak’s descriptions got told and elaborated upon and tormented until they betrayed more than they revealed. “People marveled at her ability to create the most exquisitely delicate tastes, to tap into pleasures of times gone—and often speculated on the intriguing juxtaposition of the seemingly earthy predisposition, this almost peasant-like simplicity, with the perfumed air of French aristocracy that emanated from her indifferent, icy urban demeanor.”

And so on. What started with two moody chapters intimating an era of political horrors fell down the rabbit hole of melodrama. Where there was the appearance of story development, it clogged with flummery that failed to drive the story forward. No single scene gained purchase enough to mount the rungs on the ladder of suspense. Language substituted for action. Pronouns quailed for antecedents, and adjectives turned on each other with the noble aim of contrast but succumbed to conflict. “A peasant-like simplicity” crashed against “the perfumed air of French aristocracy,” which was then mugged by the chef’s “icy, urban demeanor.” Contrast? Yes. Laborious? Yes. Rule: No fifty-word sentence about a victimized wife whose foodie talents grow byzantine should go unedited.

Against the Oakes of Bashan had so much going for it when it began, but its trees never grew into a forest; maybe it was all those leaf piles. What was advertised as a tale of Argentina’s political horrors driven by the turbines of sci-fi doom has its possibilities. But the author’s work was felled by its own axe. Too bad. It all started so well.

The reader would do well to know some Spanish, or take classes. Where, in some works, the use of foreign terms piques a description, the use of Spanish nouns, possibly Argentine idioms, in this book, lost me.

Welcome, Average Jeff. I wanted to let you know I enjoyed your review today. :)