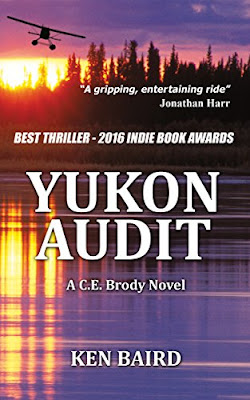 Brody is a man of the world but prefers life in a cabin on the Yukon River. For a living he flies an ancient float plane and runs a vehicle repair shop. Single, fiercely independent, a champion for the little guy, Brody loves his dogs and plane, hates cops and phones, and cooks a great meal for two.

After repairing her car, Brody is hired by a beautiful and mysterious woman to fly her over a gold mine. The two spot a missing plane. They land and find two men inside. He knows the pilot, she knows the passenger.

Within hours, Brody realizes he’s suddenly become the center of attention for the RCMP, the FBI, and two underworld gangs. His passenger is making romantic advances. He’s beaten up, his plane is hijacked, a friend’s child is kidnapped. With no idea what's going on, he's determined to get answers. And get even.

Ken Baird operated a Yukon gold mine for ten years. A former receiver-manager and private pilot, he now lives in Florida. Yukon Audit is his first novel. It won Best Thriller in the 2016 Next Generation Indie Book Awards.

There’s a lot to like in Yukon Audit. The plot moves along at a nice thriller-clip. There are multiple threads which are all pulled together and tied off in a neat parcel by the end. I particularly liked Brody. He’s a strong main character with plenty of interesting foibles. His love interest fell for him a little too quickly for my taste and felt rather two-dimensional when held up against Brody, but not enough to affect my enjoyment, because this is a thriller not a romance.

But there are two other stars in this story. And the author gets down in the weeds describing them, and that for me pushed this from a four to a five star. Who are these stars? Firstly, the ancient plane Brody pilots--a DeHavilland Beaver, according to Brody it is the greatest bush plane ever made. I really enjoyed the amount of detail about the plane and also about the flying experience. The author is a pilot, and I think he used his knowledge to good effect. And the second star performer was The Yukon. I know little to nothing about this part of the world and I thoroughly enjoyed learning about the geography and the people and the way of life in the wilds of Canada.