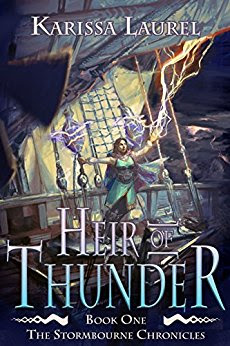 “The Lord of Thunder’s sudden death leaves his daughter, Evelyn Stormbourne, unprepared to rule Inselgrau in his place. Weeks before Evie’s ascension to the throne, revolutionaries attack and destroy her home. She conceals her identity and escapes under the protection of her father’s young horse master, Gideon Faust. Together they flee Inselgrau and set sail for the Continent, but they’re separated when a brutal storm washes Evie overboard.

In her efforts to reunite with her protector and reach allies on the Continent, Evie befriends a band of nomads who roam the world in airships fueled by lightning. She also confronts a cabal of dark Magicians plotting to use her powers to create a new divine being, and she clashes with an ancient family who insists her birthright belongs to them.

If she’s to prevail and defeat her enemies, Evie must claim her heritage, embrace her dominion over the sky, and define what it means to be Heir of Thunder.”

“Some of Karissa's favorite things are coffee, chocolate, and superheroes, and she can quote Princess Bride verbatim. She loves to read and has a sweet tooth for speculative fiction. Sometimes her family convinces her to put down the books and take the motorcycles out for a spin, or they'll haunt flea markets, searching for rusty scraps to reuse and re-purpose. Karissa lives in North Carolina with her kid, her husband, the occasional in-law, and a very hairy husky named Bonnie. Karissa is also the author of the adult Urban Fantasy series, The Norse Chronicles, where she puts a modern twist on ancient myths.”

What a wonderful new young adult fantasy series. I have enjoyed Ms. Laurel’s Norse Chronicles, so I was looking forward to the Stormbourne Chronicles. The plot is unique with steampunk elements in an old world setting. The characters are diverse, well-developed, and believable. The bad guys are perfectly evil and spread throughout the story. I really wish a few more could have been eliminated.

The story gets off to a fast start as Evelyn Stormbourne must escape the destruction of her home by revolutionaries out to overthrow her throne. Gideon Faust has sworn to protect Evie and helps in her escape. However, Gideon has secrets of his own. The plot is fast moving and there are more twists and loops than a rollercoaster along the way.

When Evie and Gideon become separated, Evie must find her way in a world she is ill-prepared for dealing with. She finds herself having to make dangerous decisions that could have disastrous consequences. The obligations she feels for friends she makes along the way is admirable, and she shows great potential of being a natural leader someday. Evie is also placed in some impossible to escape from situations that were not of her own making.

Evie is a strong, but naïve, heroine who must find the strength and wherewithal to make her way through a world she was not properly prepared to enter. I have to give kudos for the addition of the steampunk airships. This was a genuinely epic idea that sets this story apart from the mythology of Ms. Laurel’s Norse Chronicles.

Heir of Thunder has set the scene for a fantastic new series and I can’t wait to see where the Stormbourne Chronicles heads in the second book.

Heir of Thunder is book one of Stormbourne Chronicles.

I found a small number of proofing misses, however none of them threw me out of the story.