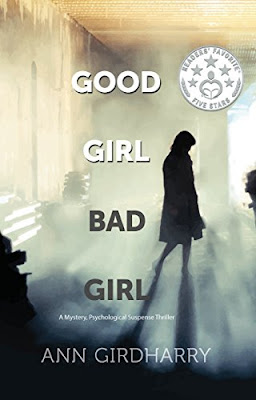 “When her journalist mother goes missing, Kal investigates. Kal's no fool, though sometimes she might pretend to be, because hiding her strengths is a great way to extract information.

An expert in psychology and skilled in reading other people and their behaviours, she first learnt her craft from her deceased father. He was a man with dark secrets.
A shadow’s been stalking her family for three generations. Kal will uncover a child trafficking network and to find her mother, she'll be pushed over her limits and forced to face a horror she's been avoiding all her life…”
Author:

Ann Girdharry was born and educated in the UK. A trained psychotherapist, she worked for many years as a manager in the not-for-profit sector, for agencies working with: carers, vulnerable older people and those with dementia, survivors of abuse, and victims of racial attacks.

Today, she lives in Montpellier, France with her husband and two children.

Overall, I enjoyed this novel. Kal, the main character had some interesting skills and a troubled history that added zest. The plot was believable, and all the threads were pulled together neatly by the end.

A couple of issues niggled at me throughout: First, Kal’s path was often eased by convenient occurrences. Although these happen-chances fell a little short of deus ex machina, they were pretty close and could have been handled better. Such as when she was so easily employed at a clinic, or gained access to a billionaire’s home. The second issue was with Kal. I enjoyed her psychological knowledge and how she applied it to glean essential information about people she encountered, but the author felt the need to over explain. This weakened what should have been a strength of the novel--when the “show” is enough, trust the reader to understand without also being told.

All that said, this is a strong thriller. The action sequences are really well done--not a trivial task. Kal is scheduled to feature in further adventures and she’s certainly a strong enough character to carry a series.

English spelling and locations. The plot revolves around a pedophilia ring. Although there is no graphic child abuse, it is insinuated.

A few typos, but not enough to upset me.