Review: Throw the Texas Dog a Bone by Russ Hall 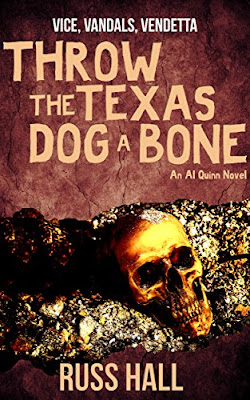 “Human bones found in a furnace at an animal shelter just outside of Austin cause retired detective Al Quinn to be called in to work the case. Before he leaves the shelter, Al adopts a new companion, Tanner, a dog just two days away from being euthanized.

Testing shows that the bones belong to more than one person. Al must deal with a pesky FBI human-trafficking team that butts into the investigation while he is training a new detective. At home, he has a houseful of people when he’d planned to live alone, not to mention his new pet. Add a burglary ring whose members threaten his housemates, along with Tanner, and someone will soon be seeing the dark side of Al Quinn.”

The winner of multiple awards, Russ Hall has more than twenty published books that include mysteries, thrillers, westerns, poetry, and nonfiction. Hall lives in Austin, Texas.

This is the third book in Russ Hall's series featuring Al Quinn as a retired police detective who keeps getting drug out of retirement to work a case. (Yeah, I don't think he understands the point of retirement either.) All of the stories are solid mysteries with what you'd expect from a good police procedural or mystery with a police detective as protagonist.

However, one thing that sets the Al Quinn series apart from many of the same type is the supporting characters. They add to the stories in numerous ways not only because they often contribute to solving the mystery (and also tend to get in the way at other times), but because they're unique, not at all the kind of characters you'd expect to see. They add an entertaining element to the stories, a laugh, and a break in the tension at times where that's just what's needed.

Thanks for the reviews all year round!