Review: Burning Down the House by Evangeline Jennings 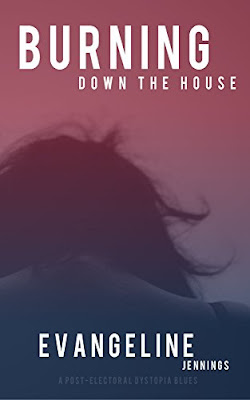 A post-electoral dystopia blues, Burning Down the House describes the future breakdown of a once great nation following the rise of a tiny-fingered snake oil salesman.”

Born in Liverpool, also the birthplace of The Beatles, Evangeline Jennings now lives in Texas. After contributing and editing a slew of short story collections, she wrote Burning Down the House, her first novel. A fan and connoisseur of popular music, you can be confident she knows her book shares a title with one of the biggest hits from the Talking Heads.

According to Wikipedia the dystopian genre is “the portrayal of a setting that completely disagrees with the author's ethos.” Typically the story will imagine a political or cultural direction someone proposes and picture the slide down a slippery slope to disaster. Not mentioned, but I think a logical conclusion, is that the reader's “ethos” being similar to the author's is going to increase the odds of the reader viewing the book as a good read or making a good point.

When I started reading Burning Down the House it was before the election. The possibility of “a tiny-fingered snake oil salesman” being elected President of the United States was still just a bad dream. (Yeah, I'm definitely in the target audience for this book.) By the time I finished, the bad dream had come true. That post-election perspective is the one all readers going forward will be viewing the story from, so that's the one I'll talk about.

Dystopias aren't pretty and Ms. Jennings has done an excellent job of imagining how ugly the country could become if the tiny-fingered tyrant of her story did everything his real life equivalent has implied, threatened, or suggested. A wild ride down the slippery slope later and very few are left happy. There are a lot of characters with different story threads for each and the only thing tying them together is the changes happening in their country. At times this challenged my memory (who is this again? Where did we leave them last?) but I managed.
Luckily I was able to remember that this is fiction. Slippery slope arguments are fallacious. This could never happen, right? Oh my gosh, I hope not.