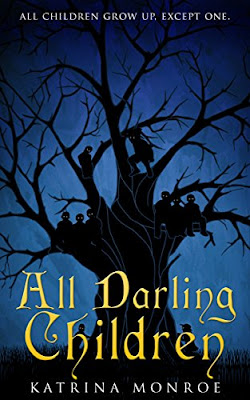 “On the tenth anniversary of her mother's death, fourteen-year-old Madge Darling’s grandmother suffers a heart attack. With the overbearing Grandma Wendy in the hospital, Madge runs away to Chicago, intent on tracking down a woman she believes is actually her mother.

On her way to the Windy City, a boy named Peter Pan lures Madge to Neverland, a magical place where children can remain young forever. While Pan plays puppet master in a twisted game only he understands, Madge discovers the disturbing price of Peter Pan's eternal youth.”

Author:
“Katrina Monroe is a novelist, mom, and snark-slinger extraordinaire.
Her worst habits include: eating pretty much anything with her fingers, yelling at inappropriate times, and being unable to focus on important things like dinner and putting on pants.

She collects quotes like most people collect, well, other things. Her favorite is, 'If you have any young friends who aspire to become writers, the second greatest favor you can do them is to present them with copies of The Elements of Style. The first greatest, of course, is to shoot them now, while they’re happy.' – Dorothy Parker

Readers can revel in her sarcasm at her website.”

Ms. Monroe has forever changed the story of Peter Pan for me. I try to stay away from dark themes, for personal reasons, however the cover for All Darling Children sucked me in. I also have a fondness for retold fairy-tales. Honestly, I was hoping for some humor to stave off the darkness, but no, I can’t say there was enough humor to save me from the depravity that is Pan. Ms. Monroe takes the story of Peter Pan and skillfully weaves in a Lord of the Flies type drama.  *shivers*

This story centers on Madge Darling, Wendy Darling’s grand-daughter. Madge wishes to escape her cold, tyrannical grandmother and find her mother. It just so happens Pan has been watching Madge for years and assists in her escape by whisking her off to Neverland. Madge is spunky, however she doesn’t come across as a strong character, and I kept having to remind myself she was only fourteen years-old. Pan’s transformation into a maniacal madman with powers of persuasion over the lost boys and the whole island of Neverland makes magical sense in the context of the story. As Madge begins to see the truth surrounding Pan and Neverland, she determines she has to confront Peter and try to set things right. But does she have the courage, strength, and cunning to pull it off?

The narrative is broken up with selections from Wendy’s diary entries from her time in Neverland, which paints a whole new picture of Wendy’s character. This gives the reader a better understanding of Wendy Darling’s later adult years as well. Flashbacks are used to fill-in other reimagined events and characters, such as Captain Hook and Tiger Lily. The twists in this reworking of the tale takes the reader on a roller-coaster ride you won’t soon forget. The end left me reeling and a little unnerved.

If you are into demented, twisted, reimagined fairy tales this may be a book you will enjoy.

There are a few F-bombs dropped and some gory battle scenes. This is not a child’s fairy tale.