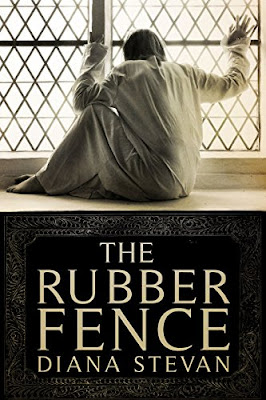 “Dr. Joanna Bereza, a passionate intern, challenges Dr. Myron Eisenstadt, the chief psychiatrist, on his aggressive use of shock treatment. He accuses her of becoming too emotionally involved with the care of an old woman who's been shocked too many times and a young mother who stopped talking after giving birth.
What's also at stake is her marriage. Obsessed with her work, Joanna is blind to problems at home. It doesn't help that one of the other interns has more than a professional interest in her and looks more like a hip musician than an aspiring shrink.

Shadowing Joanna's work is her own unresolved grief over something that happened when she was a child.

The Rubber Fence was inspired by the author's experience as a family therapist on a psychiatric ward.”

“Diana Stevan likes to describe herself as a Jill of all trades. Her eclectic work history serves her well in her writing. She's worked as a family therapist, a professional actor, professional model, teacher, and a freelance writer-broadcaster for CBC Televisions Sports Journal.

Diana was born in Winnipeg, Manitoba, where she received her Bachelor of Science in Home Economics with honors and Master of Social Work, graduating on the Dean's honour list.

She's published poetry in the U.K. journal, Dreamcatcher, and a short story in Escape, an anthology. A Cry From the Deep, a time-slip romantic adventure, is her debut novel. She has also published a novelette, The Blue Nightgown, women's fiction.

Her second novel, The Rubber Fence, contemporary fiction, inspired by her work on a psychiatric ward in the 1970s, is now available as a paperback and e-book.”

Diana lives with her husband Robert on Vancouver Island, in beautiful British Columbia. You can visit her at her website or on her Facebook page.

It’s difficult to write compelling fiction when the purpose is to explain a theme. This is particularly true when the theme is one so weighty as a doctor objecting to electric shock therapy being used to treat mentally ill patients.

There simply wasn’t enough tension in this story to keep me consistently engaged. The main character, Dr. Joanna Bereza, was supposed to be a strong, perhaps even overpowering woman, but she didn’t come over like that on the page. Too many minor characters muddied the story and left me confused at times.

The story unfolds almost exclusively as narrative and so I wasn’t ever deeply immersed. This was particularly true in the sessions where the ECT was being applied to a patient. My palms should have been sweating--they weren’t.

I seem to be hitting a seam of stories like this lately--good premise, but mediocre execution. So, once again, I think this could shine if it underwent a tough content edit.