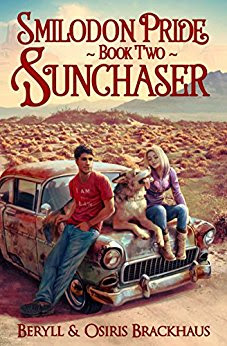 “After too many weeks as a New Mexico farm hand, werecat Roan desperately needs to get out of town or he'll start eating idiots instead of ignoring them.
But he discovers an abused werewolf in the pen of a travelling circus, and even though he can't stand the dogs, he decides to rescue his fellow werecreature. He is unaware that Betsy, the idealistic daughter of the local Sheriff, plans to do exactly the same.

Together, they manage to fuck up a perfectly good rescue operation and Roan catches a chest full of lead. Which isn't enough to kill a werecat, but now Roan is on the run to Mexico with overeager Betsy and their crippled werewolf charge in tow.

They will have to overcome their prejudices and grow into a family if they are to outrun the police, angry parents, jealous fiancées and vengeful circus fey hot on their heels.”

“Beryll and Osiris Brackhaus are a couple currently living their happily-ever-after in the very heart of Germany under the stern but loving surveillance of their cat. Both of them are voracious but picky readers, they love telling stories and drinking tea, good food and the occasional violent movie. Together, they write novels of adventure and romance, hoping to share a little of their happiness with their readers.

Beryll: An artist by heart, Beryll wrote stories even before she knew what letters were. As easily inspired as she is frustrated, her own work is never good enough (in her eyes). A perfectionist in the best and worst sense of the word and the driving creative force of the duo.

Osiris: An entertainer and craftsman in his approach to writing, Osiris is the down-to-earth, practical part of the team. Broadly interested in almost every subject and skill, with a sunny mood and caring personality, he strives to bring the human nature into focus of each of his stories.”

What a great fantasy adventure story. Sunchaser isn’t at all what I expected after reading Softpaw (the first book of this series). Roan, a saber-toothed werepanther, is a loner and thrives in his solitary existence, drifting wherever he pleases. Most of the characters, with much story time, are strongly developed and diverse. Since this is a road trip sort of adventure the scenery is constantly changing, however, it was easy to imagine a sense of place throughout. The urgency, tension, and danger in certain scenes was also well written and easily experienced.

There is a strong theme of family and personal growth in this journey, which is examined closely. Though most of the adventure is told through Roan, it is easy to see growth in Betsy and Martin as well as Roan. Betsy seems to be a shallow, oblivious blonde at first. She is the sheriff’s daughter and engaged to deputy Pembroke. Martin is the name Betsy gives the poor abused, dim-witted werewolf she frees from the traveling circus that came to town. Of course, Betsy thinks she is rescuing a large abused wolf.

When Roan checks out the circus that afternoon he can feel the magic, but can’t identify its source. He is also enraged when he witnesses the ringmaster’s abuse of the werewolf and is baffled at the wolf’s cowering behavior. Through an act of goodwill towards shifters of all kinds and, against his better judgment, Roan decides to liberate the werewolf from his cage. The fact that Betsy was in the process of trying to talk the wolf out of his jail when he arrived irritated Roan, not that he was trying to be the hero or anything like that you understand, but he readily stepped in to assist. Then things go wrong, Roan is injured and Betsy ends up saving them all with a little help from the werewolf.

I found this story full of heart as Betsy, Martin, and Roan develop a mutual respect as they redefine the standard definition of family. Roan’s self-deprecating humor is highly entertaining, especially since he is a cat who now has a doggie. Poor Martin is slowly healing as he puts on more weight and time passes, however, he may forever be a huge good-natured dog with monster teeth. It was also fun to learn a little bit about Deirdre Moonstealer, Roan’s globe-trotting, supermodel sister. I can’t wait to hear more about her.

If you enjoy easy-going, fun, urban fantasy, shifter stories, I think you will find this one worth your time.

Sunchaser is book two in the Smilodon Pride series, however it can be read as a standalone.

A small number of proofing issues, however, nothing that threw me out of the story.