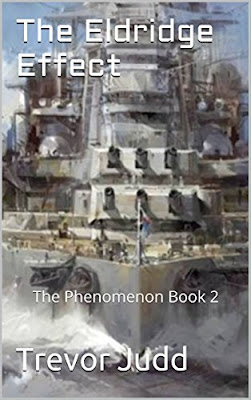 “When a World War-II era Naval vessel mysteriously appears in the middle of the Elizabeth River in downtown Norfolk, Virginia, Professor Henry Kelvin and CIA agent Jason West are called away from a meeting with the President of the United States to investigate yet another singularity related to The Phenomenon. The ship is positively identified as the U.S.S. Eldridge, a name synonymous with one of the nation's oldest conspiracy theories, the alleged Philadelphia Experiment. Finding out how and why the Eldridge has arrived in present-day Norfolk will push Kelvin and West's sanity to their limits as they gradually fall victim to the reality-warping secret at the heart of the Eldridge.”

This short story is the second in a series of four (so far) dealing with singularities that are appearing on Earth. The introductory science read like a string (sic) of quantum jargon to me, but then quantum physics is mostly inexplicable to me anyway. So what I received from the author was sufficient to convey that a crisis in the universe is underway and that’s what is causing the singularities.

Once the characters get onto the USS Eldridge, I was sucked into the time warp, which was well described and entertaining and brought to mind the TV series “Fringe,” which I also enjoyed.

I don’t read many short stories (I didn’t realise it was a short until I’d finished it, d’oh!), so I can’t really judge if this was long enough. I wouldn’t have objected to some fleshing out, but it was a fast, fun read.

I like the variety of lengths we get with indie publishing. A 10K story can explore an idea fully - but it doesn't have to be a big idea with lots of legs. The SF community is still doing this in its grandee magazines like Asimov's and Analog. But that used to be the only way to get to read them.