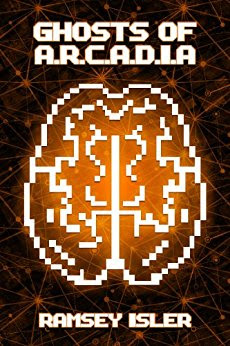 Miguel Naciamento is a graduate of Stanford University, a freelance writer, and recipient of the prestigious Pulitzer Prize. In his bones he feels a second Pulitzer from the fishy atmosphere generated by the A.R.C.A.D.I.A. debacle. ARCADIA is a computer game, but not just your run-of-the-mill game one can find on the shelves of Best Buy. Created by computer genius, Ivy Yeun, ARCADIA is “an interactive world simulator with incredible detail and the ability to control everything with the power of thought.” The device can actually read a players mind.

Ramsey Isler’s day job is a software developer and designer in Los Angeles. When not playing with his cat or writing feature articles and media reviews at IGN.com, Ramsey enjoys writing science fiction and fantasy. One of his most recent novels is The Remortal, a tale about a teen boy surviving on the streets of LA who bumps into a man who wants the teen to kill him.

Check out Mr. Isler’s author page on Amazon for more of his books or feel free to visit his blog.

Author Ramsey Isler has created a world in the near future where gamers get a unique experience of a lifetime. However, players are fleeing from the system like rats in a flooded tenement. Someone has hacked into the impenetrable ARCADIA system stealing money from bank accounts despite the fact that they had never linked those accounts to the game. With the help of Ivy Yeun, Naciamento sniffs out the story that peels away layer after layer to uncover an astounding revelation.

Ghosts of ARCADIA is a heart-pounding tale that will keep readers glued to its pages through this fascinating novel.