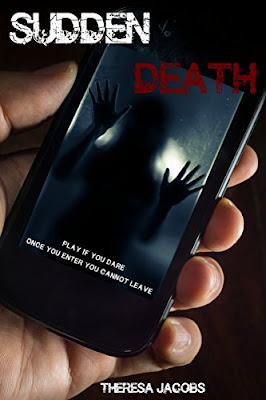 Imagine downloading a game for your phone where it’s played in the real world. A group of college students have relied so much on technology that they have found themselves battling a demon that has been downloaded into their phone.

Theresa Jacobs is a Canadian author who has written poetry, short stories and a children’s picture book. Jacobs is an avid TV watcher and loves movies. For more, visit Theresa’s website.

Technology has taken over our lives. It's a fact. You go down the block (or maybe ride a hover board) and people are texting while they walk, listening to music on bluetooth headphones while they jog, talking on the phone while they drive -- and that's just some of the basics we do with technology.

But what happens if the world we live in now, the one where phones are glued to our hands, becomes possessed with a demon that lives inside of the tech? In short, it's not good.

Sudden Death follows a group of college students as they learn a game they have downloaded is possessed with a demon whose only goal is to kill. The premise is relevant and interesting, but the execution just wasn't there.

The book could have used another edit before being published as there were several mistakes. While intense, which is an A-plus for a horror book, there was also too much of jumping to people in peril who were not relevant to the storyline. The novella didn't have much character development either, which might have been a factor of the short read, but each character felt as though they each just had one note. There wasn't much depth.

I wanted to like the book because as someone who is immersed in technology (I still rarely read print books), I can definitely relate. But this book needed work before it should have been published. If there is ever an update, I would love to check it out because there is a great story in there.

There were several typos or errors.

Great review, Sooz. The ones you "want" to like are always most difficult to finesse--deftly done. This sounds like a very interesting premise.

Thanks. It was a still a solid read because the premise was so interesting. I just think it would have used a bit more TLC.

Thank you for reading and an honest review Suzy, I am only just coming across this link now. I appreciate your feedback as I am working on improving my skill and you have defiantly given me food for thought. I think I was so worried about getting my "unique" Idea out before anyone else that I just rushed it. Revisions are on my to do list :) Keep up the goos work and thanks again. Theresa