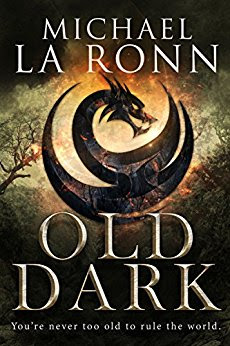 Description:
“Old Dark is a viperous dragon lord who rules the world with an iron fist. For two hundred years he and his dragons have terrorized humans and elves, forcing them to pay tribute or die. There’s a deadly conspiracy brewing. And if he doesn’t contain it, it will destroy him and everything he’s built. But Dark was born to fight. There’s a reason the ancients called him Dark the Wicked…Old Dark is the first book in the dark fantasy series The Last Dragon Lord. Readers who like the Age of Fire series and Smaug from the Lord of the Rings will enjoy this series.”
Author:

Michael La Ronn is the author of many science fiction and fantasy novels including the Android X, Modern Necromancy, and The Last Dragon Lord series.

In 2012, a life-threatening illness made him realize that life is too short. He’s devoted his life to writing ever since, making up whatever story makes him fall out of his chair laughing the hardest. Every day.

Discover more work by Michael by visiting his website.
www.michaellaronn.com

This fantasy begins eons ago in a world where magic is power. The society is ruled by dragons through their control of the magic aquifer. Elves are able to use magic, but only have limited access and humans are the lowest caste, unable to leverage any magical powers.

Once the dragon lord, Old Dark, is betrayed, the novel jumps forward 1,000 years and we’re presented with a close-to modern world where dragons no longer rule, but have been accommodated in society through an ingenious mechanism and Elven-human inter-breds are in control.

The story focuses on an upcoming inter-family political race for the post of Governor between Lucan Grimoire and his uncle (the current governor). I found this modern-day fantasy world fun to experience--the huge time jump really worked for me. The writing was clean and easy on the eye. Unusually for a fantasy, the story was very plot driven with little time spent developing the characters (except the main dragon--Old Dark).

So, this was a solid four-star read for me until the author ended on an unforgivable cliffhanger. Man. I hated the “To be continued….” Yeah, I knew that because this is book one in a series, but for heaven’s sakes finish the first book’s story arc before writing “The End.” Jeez!

Thank you for dropping by and commenting... Pete.

Thank you very much for your review, Pete. Very much appreciated.

You're welcome, Michael. Thanks for dropping by.