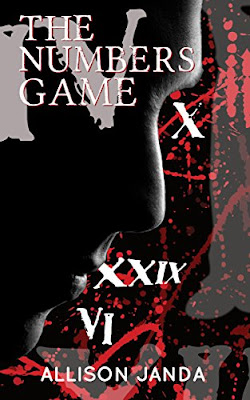 "When the body of a young woman is discovered by Detective Jack Crawford, he knows the notorious Roman Numeral Killer is back. What's worse, the appetite of the killer has changed from prostitutes and drug addicts to just about everyone else. As the case explodes putting all of Seattle in an uproar, Jack works tirelessly to stay ahead of the noise. Catching up with the most dangerous killer seen in decades won't be easy. A single misstep could make it deadly."

Allison Janda has written many books. In her own words: "I'm an author because being an author can make people laugh and cry and question their beliefs and turn them on and turn them off and fall in love and all of the other things that humans should do in order to live a full life. And I hope that in reading my books, you feel something - something that reminds you of why you read books in the first place."

Jack Crawford, is a detective who finds the dead body of a man when he is out running. The Roman Numerals killer has struck again, leaving numbers carved into the man's ankle. Shortly afterwards the body of a woman is found in a house, this murder apparently not the work of the serial killer. The dead woman was the girlfriend of Greg Hahn, brother to Emmet, who is Jack's partner in homicide investigations. The only suspect is Erica Barnes, Greg's ex-girlfriend, who was at the scene but claims she was only there to get her dog back. Jack believes in her innocence but finds it difficult to find another suspect.

The main character, Jack, is nominally the hero but his reaction to various situations is weak and confused and he finds it hard to be objective as he is falling for Erica who is a pretty blonde with pink, pouty lips.

There is a great deal of humour in this book which sets it apart from the usual grim, murder mystery and the premise is exciting and credible but the narrative is let down by the clichéd writing and unrealistic dialogue. There are long sections in the book dealing with the dog, and elsewhere, with Erica's stay in hospital; these sections add nothing to the story and could well be edited to half their length.

The editing is untidy with many errors in syntax, grammar, and some typos.

" . . . hospitals had certainly been the most depressing thing Jack had ever seen. This place, though. This place was giving the hospital a run for their money,"

The book would definitely benefit from some re-writing and a more organised plot line. It seems as if the author isn't quite sure of what this story is about; it begins with a serial killer murder, but the main part of the book doesn't address this at all; it only reappears and ties in at the very end. Each part is interesting in itself although somewhat lacking in tension.

Still, this book has an undeniable, bouncy charm to it which made it very enjoyable despite its faults.