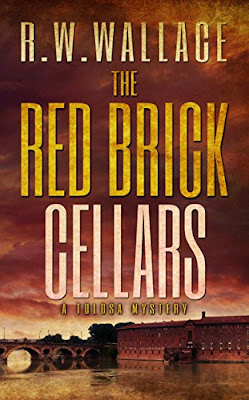 "A murdered mayor. A second body reduced to skeleton and dust. Their public display so horrific that the police are baffled.

Everyone assumes uninterested heir Louis Saint-Blancat will finally settle down and focus on the politics of Toulouse, France. Louis becomes the center of attention in the press as his mother and sister pressure him to follow the family’s political tradition, while all he wants is to track down his father’s killer and return to his globe-trotting lifestyle.

Determined to ferret out the story behind the perplexing assassination that took place at the very center of Toulouse, struggling English journalist Catherine Marty finds an unlikely ally in Louis."

"R.W. Wallace grew up in Norway, but has lived almost half her life in Toulouse in South-Western France. Fascinated with Toulouse and its history, it became the natural setting and inspiration for her stories. She divides her time between a busy city life in Toulouse and a laidback country setting at the foot of the Pyrenees with her better half and two miniature versions of herself."

For more information visit the author's page on Amazon.

This is the story of Louis Saint-Blancat, home from America for his father's funeral in Toulouse. Mystery and rumour surround his father's sudden death and Louis teams up with journalist, Catherine Marty, to look for the truth. His father had been the popular mayor of Toulouse for many years. Was Louis now to believe that he had been taking bribes all the time? His mother and sister are very vague about the idea; their only interest is in putting pressure on Louis to go into politics himself, to take his father's place in the town.

A gripping opening chapter tells about Louis' murdered father, found with the mummified remains of a prostitute which falls to dust when touched. There are two main characters, Louis and Catherine. Louis is handsome, cultured, rich and charming. Catherine is blonde, pretty and broke. The town, Toulouse, is almost a character itself. The author obviously knows it very well; she conveys the look and atmosphere of the squares, the streets and the houses with great affection.

The murderer is suitably deranged and dangerous, and believable too, and there are some delightfully ghoulish passages:

"Catherine moved her light out along the arm attached to the hand. Staring blue dead eyes came into view. The skin was starting to fall off and a patch of blond hair was already missing."

"The heads fell off quite easily—a fact Catherine could have done without knowing—but cracking the skull open took a solid kick to the side of the head. . "

The main problem with this book lies in the characters of Louis and Catherine. Neither seems to be quite grown up; their conversations are often childish and petty and Louis seems to be very much under his mother's influence although he is in his mid-thirties. He thinks:

"His mother would have a fit if she saw him talking with his mouth full."

And he is comforted when she makes him her special cup of hot chocolate.

Catherine, at first, appears to be an independent, confident, career woman. She has an ex-husband whom she treats with impatience and hostility but admits eventually to feeling abandoned and lost without a man in her life.

Another problem is the incorrect use of words - "absolutions" instead of ablutions, and incorrect grammar/syntax.

“I have no plans of going into politics.”

English is not the first language of the author which explains these mistakes. There is also quite a lot of over-explaining and repetition, and information conveyed through unatural dialogue, but nothing that a good edit wouldn't fix.

The narrative pace of this novel is good, the story is interesting and the ideas behind the murders are very creative but the bad syntax and the immature characters spoil the overall impression.

Many errors in syntax