Review: Blood On The Table by R.C. Dilan 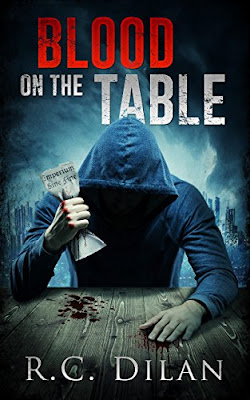 “Controlled by the faceless elite, those lucky enough to avoid life in prison, live their days steeped in fear of tomorrow. Jackson Elliot has spent a decade behind the concrete walls of Sidney prison being punished for his parent’s radical views.
When a charismatic con man, Bobby Ford, becomes his cellmate, suddenly Jackson can see a light at the end of his bleak tunnel and starts to hope that maybe he can escape and reinvigorate the revolution that already claimed the lives of his family.”
Author:

“R.C. Dilan was born and raised in Bellingham, Washington, a small city north of Seattle. Dilan always enjoyed reading, and as a kid wanted to become a writer, practicing by trying to write stories that mimicked movies he saw or books he had read—they were all pretty terrible.

While teaching English in Japan, he started writing his first book, Blood on the Table. Most of the first draft of his book was written while commuting on the crowded trains navigating through Tokyo. It was a long process, full of long nights and weekends spent editing and rewriting, but one that fulfilled a lifelong dream.”

The unusual beginning location drew me into this story--most of the first third of the novel takes place inside Sidney prison. I didn’t read the blurb, so it took me some pages to realize this was a dystopian adventure. I enjoy that genre, it just came as something of a surprise because I was quite a ways into the story the first time the “elites” and the revolution were mentioned.

The story is told in first person and the plot is interesting and moves along at a fast pace, which I enjoyed. What I didn’t enjoy, though, was the lack of tension. Each obstacle was overcome without me ever suspecting there might be trouble for the protagonist. Jackson was always one step ahead of everyone. Bobby was an interesting character, but his foibles were over explained and I got a little fed up being repeatedly told about this character’s strengths and weaknesses. A lot of the plot advancement was done through dialogue. Nothing wrong with that per se, but too much of the talking consisted of long explanatory parables

This is the author’s first novel, and I think it would benefit greatly from a tough content edit. Especially as it’s going to be the basis for a series.

Thank you for such a honest review. I haven't read this piece, but tension is something that I feel gives a dystopian novel more power. What are some great dystopian books that you would recommend, in addition to this one, Mr. Barber?

Hi "OBR," reading is very subjective. I suggest you check out the genre list on the right of the page and take a look at all the dystopian books Big Al's Pals have reviewed. I'm sure you'll find something in there to fit your eye. Thanks for dropping by... Pete

Very true. Thank you for responding. I will look into those reviews. I wish you a lovely day :)