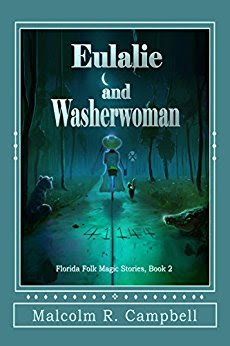 “Torreya, a small 1950s Florida Panhandle town, is losing its men. They disappear on nights with no moon and no witnesses. Foreclosure signs appear in their yards the following day while thugs associated with the Klan take everything of value from inside treasured homes that will soon be torn down. The police won't investigate, and the church keeps its distance from all social and political discord.

Conjure woman Eulalie Jenkins, her shamanistic cat, Lena, and neighbor Willie Tate discover that the new 'whites only' policy at the once friendly mercantile and the creation of a plantation-style subdivision are linked to corrupt city fathers, the disappearing men, rigged numbers gambling, and a powerful hoodoo man named Washerwoman. After he refuses to carry Eulalie's herbs and eggs and Willie's corn, mercantile owner Lane Walker is drawn into the web of lies before he, too, disappears.

Washerwoman knows how to cover his tracks with the magic he learned from Florida's most famous root doctor, Uncle Monday, so he is more elusive than hen's teeth, more dangerous that the Klan, and threatens to brutally remove any obstacle in the way of his profits. In this follow up to Conjure Woman's Cat, Eulalie and Lena face their greatest challenge with scarce support from townspeople who are scared of their own shadows. Even though Eulalie is older than dirt, her faith in the good Lord and her endless supply of spells guarantee she will give Washerwoman a run for his ill-gotten money in this swamps and piney woods story.”

I love Lena’s irreverent narration throughout this story. She is able to give us a unique perspective of an era from the past most of us haven’t experienced. Since Lena is a cat she can’t be bothered by human emotions, unless you are scratching her behind her ears. This tale, while being fiction, rings true on many facts. The addition of magical realism brings us an eccentric, enthralling, and entertaining history of days gone by.

It wasn’t all white mistreatment and abuse on the black population, there was black on black abuse as well. Greed is the common agent that knows no color. Thank goodness Eulalie is around to try to set some misdeeds right. Pitted against a powerful hoodoo man, who practices black magic, it’s questionable whether Eulalie can outwit and best Washerwoman to return a more even balance of powers in her corner of the world. The struggles are realistic of the time.

I love that Eulalie’s and Willie Tate’s relationship is more fully explained and I am glad Adelaide, Eulalie’s daughter, is back in town. Old family secrets are exposed and this made my heart smile. Please be aware that the language in this story is not always politically correct, however it is true to the era. I found this a thoroughly enjoyable tale and while the main story arc was brought to a satisfactory end for the time being, things are still open. Also, Eulalie takes off on a whole new adventure that is sure to be entertaining on an emotional level.
I can’t wait!

Eulalie and Washerwoman is book two in Malcolm R. Campbell’s, Florida Folk Magic Stories. I believe this can be read as a standalone, however the characters are unique and some depth could be lost. Also, please be aware that the language is not always politically correct, however it is true to the era.

I came across a small number of proofing issues.

I'm buying this one for my daughter. She loves these kind of stories.

Thanks for dropping in and commenting. I hope she enjoys it as much as I did.