Review: The Dragonward by Michael Meyerhofer 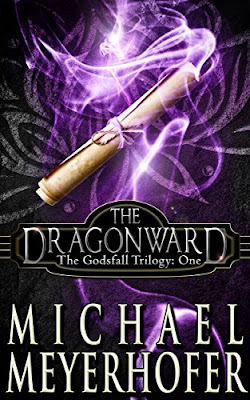 Rowen Locke, Igrid, and Jalist have found their place in the world after the War of the Lotus, but it seems the peace is short-lived. Alliances are crumbling and one leader is looking to rip the fabric of Lyos apart. Locke must stop him, but there’s always a cost.

Michael Meyerhofer is a fiction writer and poet. His first book, Wytchfire, was nominated for a Reader’s Choice Award on Big Al’s Books and Pals. Meyerhofer received a BA from the University of Iowa and his MFA from Southern Illinois University-Carbondale. He currently resides in Fresno, CA.

The Dragonward picks up three years after the War of the Lotus, which was chronicled in Meyerhofer’s Dragonkin Trilogy. It’s always fun coming back to characters that you enjoyed connecting with even if it means trouble is on the horizon again. The characters have all changed based on their past experiences, but not so much that I felt like I was reading about different people. Going through what they did in the original trilogy would change anyone, and it’s interesting to see their development.

The storyline of The Dragonward is interesting. Even if the world was in trouble in the original trilogy, somehow the stakes now seem even higher. There is a stark divide in Lyos of those who want to eradicate the world of magic and those who want to live in that world. Fanatical groups are on the rise and Rowen Locke is dragged back into it because he’s the hero that Lyos needs since he is the only one that can hold the sword Knightswrath.

I loved the trio of Igrid, Zeia and Keswan fighting together. Three women who didn’t need the protection of men to take care of the themselves. Together, they are a formidable group that can put down most any character, probably even Locke himself.

The biggest miss in the book was the introduction of characters early on and then forgetting about them. Meyerhofer introduced The Scion, a Dwarr so against magic that he would fight and die to get rid of it. But we only get to see him once and then he is briefly mentioned toward the end of the book. I felt there also could have been more with the main bad guy. Algol was supposedly meaner and nastier than anything Locke has ever faced, but he just didn’t seem scary or even ruthless enough.

In the end, I actually wanted more. That’s how much I enjoy this world that Meyerhofer has created. I still enjoyed The Dragonward and loved revisiting a few old friends in their new adventure.

This could still be read as a standalone if you have not read the original trilogy.