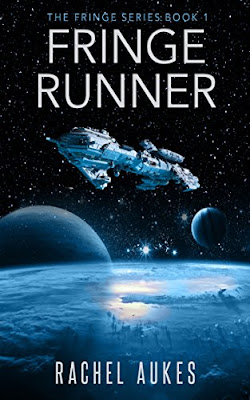 “An old space captain hounded by arthritis and war memories, Aramis Reyne struggles to make enough credits to feed his crew and keep his ship flying by running mail and supplies to the farthest, most dangerous reaches of the Collective known as the fringe. When he's offered a no-questions-asked contract to pick up a package, he jumps at the opportunity. But, he quickly learns that he should've asked questions...and that there are far worse things in the Collective than being broke.”

Rachel Aukes is the bestselling author of 100 Days in Deadland, which made Suspense Magazine’s Best of the Year list. She is also a Wattpad Star, her stories having over three million reads. When not writing, she can be found flying old airplanes across the Midwest countryside.

Fringe Runner is a light, fast read. The plot drives the narrative throughout. Neither the characters nor the technology is dealt with in any depth. Many of the challenges faced by Aramis Reyne are familiar: A collective of citizens being manipulated through fear-mongering and terrorism to allow a takeover of their society by a powerful creature race. A cabal of elites who pull the strings in secret with no consideration for the consequences. A Fringe of renegades who shirk authority and end up being the under-gunned saviors of the day.

These comments aren’t meant as criticism. This is the very reason I picked the story. I needed some mental relief from the dark material I’m currently reading on a research project, and this book delivered.
If you enjoy space adventures, you can certainly do worse. Also, this is first in a series and currently offered at a teaser price of $0.99, so you might spend little and find a new author or series.

Here sits my main gripe with this story. I noted over twenty typos or missing words or erroneous spellings. This is way past acceptable. Especially when most of these were obvious errors that one more read through would have found. Maybe the author would like to fix these and get a four star review next time.