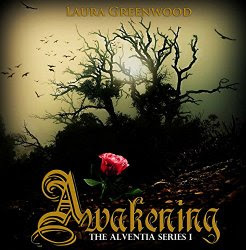 Laura Greenwood, “I'm in my early twenties and live in the UK, I loved English Lit from a young age and have always been a reader!

I work in food basically! As a catering supervisor and as a bar maid/waitress. I just got a BSc in International Business and French and I'm a Brownie Guide Leader. I also write web copy for my family's business.”

Ms. Greenwood also reviews books on her website and posts to Facebook. Be sure to check her out. Awakening (The Alventia Series Book 1) is her debut novella.

“In an effort to have a child, the Queen makes a deal with the Dark King, but she soon discovers that the deal has dire consequences for her beloved Sleeping Beauty. In an effort to help, the Queen’s mother alters the curse so that Keira will sleep for 100 years, but there is a catch; if Keira awakens before then she may still be doomed.

After sleeping for over 90 years, Keira is awoken by Philip, the son of the Dark King and the one she was intended for. Despite sharing his father's bloodline, Philip refuses to be like his father and won't make Keira do anything that she isn't ready for.

Supported by a powerful witch and her brother, Hansel and Gretel, Philip and Keira have to make a choice, one that will define Keira's destiny. Changing their lives forever.”

I found this novella an enjoyable read. Keira is your typical princess in the beginning of the story. She has heard the prophecy her entire life but doesn’t believe in fairy tales. On the eve of her eighteenth birthday where Keira was announced and crowned heir to the throne of Alventia to the entire kingdom. As the ball commenced she danced her way into adulthood hoping to find her prince. At the end of the evening on her way to her bed chamber a light from a small room attracted her attention. Hoping to find attendants in a compromising position she peeked into the room. Finding a spinning wheel instead she sat down to spin. We all know she pricked her finger and fell into a deep sleep.

This is where the story differs and the author takes us on a unique journey where Keira’s sleep isn’t as deep as we supposed. Keira is able to hear everything going on around her occasionally dreaming dark dreams. As time passes and her parents pass away she mourns their loss. Eventually she is left alone with few visitors or caretakers and starts to feel a change taking place within herself. We see her dreams, know her desires, as we watch this transformation occur, although we don’t know why because we don’t have all the pieces of the puzzle yet.

When Prince Phillip arrives, he knows what she needs and desires. Phillip, despite being raised by the Dark King, is patient, kind, has a good heart. He knows Keira is meant for him alone but wants her to love him for the man he is. Not because some prophecy or the Dark King deems it so. He feels an overwhelming desire to prove himself to Keira because of who his father is.

Including the adult Hansel and Gretel in this tale was absolute genius. They play an important role and bring part of the story to light. It is through Gretel that we get the full prophecy. Ms. Greenwood was able to modify them just enough to make them fit perfectly in her story. It’s going to be interesting as we learn more about Keira’s heritage. We were told early on her grandmother had enough power to alter the curse placed by the Dark King. Not to mention other factors that may come into play as certain aspects of the prophecy still hang in the balance. I look forward to more from Ms. Greenwood, I think she is an author to watch.

This is Book one of The Alventia Series. The author uses British spellings. There is some sexual content however, it is mostly implied and not overly descriptive.