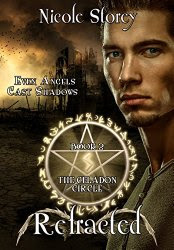 From Nicole Storey’s website: “I’ve always loved to read, and spent many of my childhood days in the tall branches of an apple tree in our backyard. I pored over books by C.S. Lewis and authors of fantasy and paranormal, fought evil witches, traveled to distant lands, and saved the day…

I live in Georgia. I am married, have two prodigious children, and a plethora of pets. I love to read and review books, cook, garden, and I plan for Halloween all year long. I’m a huge fan of the television show, Supernatural.

In my spare time, I slay demons, conspire with angels, and keep humanity safe from Evil. I think my life turned out okay.”

Ms. Storey’s, Celadon Circle Book One: Blind Sight was the winner in Big Al’s Books and Pals Readers’ Choice Awards for 2014 in the Fantasy category!

“High in the Huron Mountains … Jordan is forced to live with her demon father, Aamon, or risk capture by the angels. Miserable, homesick, with emerging powers she can’t begin to comprehend, Jordan doesn’t think her luck can get much worse.

And then Aamon announces she must meet with his nefarious boss.

In Heaven … Michael has a secret, one that will cost him his position as an archangel if discovered. Jordan’s newfound status could expose everything he’s tried so hard to keep hidden.

She must be silenced.

In Dixon’s Bluff, Wyoming … Uncle Casen and the twins are desperate to find Jordan and bring her home. With no help from their Guardian or the Celadon Circle, Casen makes a decision that unravels what’s left of their family. Outraged, Quinn sets out alone. With help from a holy relic and a long lost friend, he learns of a chilling prophecy – one that not even the angels and demons can survive.

And it begins and ends with Jordan.”

This story just became absolutely amazing. Tangled webs are woven in heaven and on earth. This book shifts points-of-view and each chapter ends with you sitting on the edge of your seat where it takes you on to the next nail-biting situation. It never lets up.

Jordon’s powers are growing and at war inside her heart and mind. She is pushed to test some of them out early in the book and managed to not lose control. She has no idea how strong she really is. She also makes a new friend, Xander, whom she feels drawn to but doesn’t know why. The big boss sends Jordon on a mission, she gets to choose team members and if she completes her mission successfully she will be allowed to go back home to her brothers and Uncle Casen… or so he says.

In heaven Michael is making power plays and Gabriel seeks help from the Virtues. Where Gabriel learns about the prophecy and is told there are certain stands he needs to take, despite Michael.

Quinn discovers a powerful relic on the bookshelf Uncle Casen says he’s never seen before. An old acquaintance shows up with a plan to find Jordon. Outraged when Uncle Casen and Nathan agree to give the plan a shot, Quinn takes off on his own with the relic. As he suspected, things go to hell back at the house. I can’t say much more than the pace was fast, furious and emotional. Surprising twists in each storyline kept the suspense high. It was hard to put the book down and I found myself reading until my eyes wouldn’t focus any longer. The climax… holy crap!

Refracted is an outstanding addition to this series with unique, intelligent story-lines that were easy to read without having to go back and re-read book one. Well done, Ms. Storey. I hope we won’t have to wait too long for book three.

Refracted is book 2 in The Celadon Circle, I would recommend reading book 1 Blind Sight first. There are several F-bombs, the story honestly needed them.

I found no issues.

Thank you so much for your review of Refracted. I'm SO glad you liked the story! I can't stop smiling right now!

LOL, you are welcome, Ms. Storey. I am looking forward to more from The Celadon Circle!