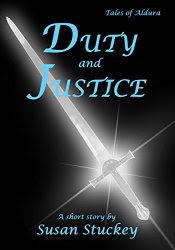 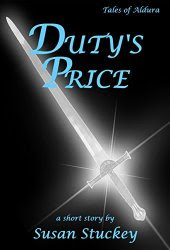 Susan is a proud mother of an active duty soldier.

Because, as her son tells her, she is ‘older than dirt’, her photos are in albums on shelves–not digital. (She knows she is way behind the times.)”

Description:
Duty and Justice:
“While returning from a mission, Stormhawk Ranger Jatham Draben aids a starving family fleeing their home to escape harm to their daughter. While investigating their claims, he discovers the puzzle of a Lord accused of abusing his tenants, but who demonstrates quite a different persona. Can Jatham determine the truth and stop the abuse?”

“Jatham Draben is ordered to search undercover for the Chorkan Red. All of his friends and fellow Stormhawk Rangers believe he has been thrown out. Duty’s path is frequently difficult. What will it demand Jatham pay?”

Since these two short stories are closely related time-wise and a common thread of a Chorkan stone, I decided to review them together.

As Jatham was headed back to Stormhawk Haven he encountered a starving, displaced family who are escaping from Hasterford to protect their young daughter from Lord Haster. Jatham offers them food and safe haven for the night and directs them to head to Wishwood for employment and a place to live safely. As he heads out the next morning Jatham decides since he has a few weeks before he needs to report back to Stormhawk duties, he might as well investigate Samual and Theta Esser’s allegations against Lord Haster.

When he arrives at the village of Hasterford he finds a picturesque township all working together to shear Lord Hester’s sheep. Except there was an absence of young girls around and no one was talking. Until one day Jathan catches sight of suspicious behavior involving Lord Haster and two guards at Wida Massay’s front door, which also comes with a tingling feeling of Chorkan magic. Wida asks Jatham for help for her granddaughter Elsie who is inside the house. Jatham jumps to the rescue and jerks a Chorkan magic stone necklace off the one who looks like Lord Haster. We learn that Elsie hasn’t spoken for at least a year and half and has secretly been seeing the town Healer who had been ordered by Lord Haster not to treat the townspeople. I really like Jatham, the justice he dispensed on the two guards at the door was perfect in every way and I got a kick out of the Healer laughing at it. I love his devotion to his job, he is fair and balanced to a fault.

This title unnerved me. I felt dread all around. When Jatham returned to Stormhawk Haven he was briefed on his new assignment to go undercover to find the Chorkan Red. Making it look as though Jatham has been kicked out of the Stormhawks, he solemnly leaves the Haven’s Keep in plain clothes without speaking or looking anyone else in the eyes. Commander Kendrick thinks there could be a mole in the Rangers or on the Council, so documents and minds have been altered concerning Jatham’s last assignment in Duty’s Call.

Red’s Chorkan stone is different from past imprint stones, it was made from a different base rock. The one Jatham turned in from Hasterford was the same as Red’s. Commander Kendrick is convinced they are connected. In addition strange behavior has also been reported from Shipley, a small town on the Mickels River. Their Healer has disappeared into the hills and stopped treating people. This coupled with Lord Haster’s strange behavior is worrying for Commander Kendrick. The timing of the Healer’s disappearance seems to have occurred around the time Jatham discovered Red’s Chorkan stone.

Commander Kendrick decides all this needs to be investigated and Jatham’s undercover mission can be delayed so he can accompany him to Shipley. Once in Shipley they both find out, from separate sources, that things are not exactly as reported. Jatham learns from the stable owner, he actually knows the healer from the hills. Her name is Josena Falloway and Jatham thought she had died three years earlier. I admire Ms. Stuckey’s writing style, she doesn’t mince words, she is able to tell a story packed with adventure, description, and emotion without wasting a single word. This story only has 26 pages, and every word is magic.

Great review, Linda. I too love these tales set in Aldura. It's a true escape to spend a few hours in the amazing "world" she has created.

Thanks for the review - I am so delighted you took the time to read AND that you enjoyed the stories.

Really appreciate all that you reviewers do for authors and books.

Pete, I want to thank you for introducing me to this series. It is one of my favorites. The characters are all unique and entertaining. Duty's Price actually made me cry, it's amazing to me that in 26 pages Ms. Stuckey can draw me so into a character that I cry for them.

Thanks for dropping in and commenting, Ms. Stuckey. I am looking forward to more of your stories. :D