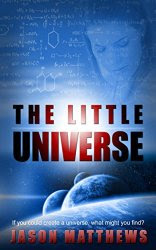 Novelist, blogger, and writing coach, Jason Matthews is the founder of a Facebook group of over 2000 writers. Other books besides The Little Universe include Jim’s Life, How to Make, Market, and Sell EBooks All for Free, and Get on Google Front Page. Jason lives with his family in Prismo Beach, California. Drop by and perhaps you can entice him to a game of chess or scrabble.

Rose Adams had a dream—to reproduce The Big Bang in miniature—to simulate a tiny universe. Killed in a car accident, her inventor husband, Webster Adams, sees his wife’s dream to fruition. However, Adams realizes he’ll need help and seeks out the assistance of Jon Gruber, a local handyman, to assist him during the experiment.

In a writing style integrating science fiction with spirituality, author Jason Matthew’s novel, The Little Universe, is written in the first person point of view of Jon Gruber. Jon is a local handyman for hire. Once he begins work for the inventor, Gruber’s eyes are opened to the wonders of the universe—literally.

As Adams’ universe evolves, his AI computer, Jim, seeks out sentient life orbiting the tiny universe’s stars. Through Jim’s cameras, Jon and the team of scientists that join Adams encounter worlds with mystery and scientific advancement.

Webster Adam’s daughter, Whitney, is drawn into one world whose mysterious dwellers may hold the key to everyone’s questions.

The Little Universe will keep readers riveted, especially if they are interested in the meaning of life and beyond.