Behind The Eight Ball / Craig Furchtenicht 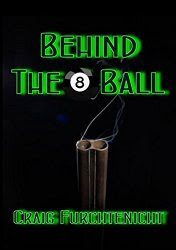 The author was born and raised in Iowa where he currently resides with his wife. Craig enjoys rock hunting, horticulture and the outdoors. He has released other work including Dimebag Bandits, The Blue Dress Paradigm and Night Speed Zero. Craig has also contributed to crime anthologies 12 Mad Men and Rogue.

The plan was simple enough, as far as spur of the moment plans went. Robbing a junkie with no hands of his copious stash of smack and hopefully a respectable sum of currency should have been no sweat. Park a couple blocks down the street, walk in and rush the place to liberate the dope fiend pervert of his ill-gotten goods. Knocking off a helpless cripple and his handful of strung out groupies that probably didn't really want to be there in the first place was easy as taking candy from a baby. Or so they thought.

The two surviving members of The Dimebag Bandits are back and this time they may be in over their heads. When a seemingly easy job turns bloody, the boys haul in the score of a lifetime. Only problem being, that lifetime might just be ending sooner than they think. Amidst the junkies, the terrorists and the constant backstabbing... they may truly be stuck Behind The Eight Ball.

It is worth saying at the outset that strictly this is a follow up to the author’s novel, Dimebag Bandits, however it can be read entirely as a stand-alone.

The two survivors referred to in the description are Kori and best friend, Todd. The novel opens with a drug theft, the two protagonists doing the thieving. What they expected to be small time and easy unfortunately turns out to be anything but. The ramifications for everyone even slightly near to them are catastrophic. The drugs and cash they’ve stolen amount to a small fortune. The people the illicit products belong to aren’t pleased to say the least. They’re the Kaddoura’s, the local gangsters who provide everything anyone could want – for a fee. Ibrahim is the top dog, his two nephews, Akil and Abdel, are vicious screw ups who take whatever they feel like.

The friends have a few other problems to deal with. One of their party is wounded and needs treatment. They’ve also the stack of drugs to move on. They turn to another old friend, Jacob, a vet, to fix up the wounded girl. They also happen across an Indian who can buy the drugs. All seems to be progressing well, but the Kaddoura’s are soon on Kori and Todd’s trail, cutting through the population like a wrecking ball.

This is a step on from Dimebag Bandits which received four stars. It is just as pacy and action packed, but tighter and the characters a little more developed. The narrative is an intriguing outcome, then situation, approach. In other words, we see the consequences before reading about the activity which produced it. The dialogue is snappy and coarse. The location, rural Iowa, is well painted and an excellent backdrop for the story. The strongest element are the characters, from the sleazy Kaddoura’s to Todd and his misfiring love life, to junkies and conflicted bodyguards they suit the plot perfectly.

If you enjoy hard hitting, no nonsense crime, this would be right up your street.

Plenty of swearing, drug use and violence.

While a sequel, can be read as a standalone.