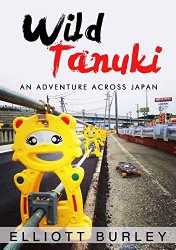 “Elliott lives in Tokyo in a shoebox-sized apartment. In his free time and while at his 9-5 job, if he can get away with it or not, he likes to read, write, and daydream of new adventures he'd like to set out on, like skateboarding across Cuba and riding a donkey across China with an Italian guy named Ramon, who lives off bananas.”

“After working in an Alaskan oilfield, Elliott settled in Tokyo, with a job at an English conversation school and a loving girlfriend, Zucchini. But Elliott got tired of settling and decided to do something new, something fun—quit his job and skateboard through Japan end-to-end in 46 days.

With the help of Japan’s 17,569 7-Elevens and lots of rice, Elliott embarks on his epic journey. Join Elliott in his adventure through the mountains, over cracks, and under rain, as he escapes snakes, wild pigs, and bears.

As anyone who regularly reads my reviews knows by now, I'm a fan of the travel memoir in all its forms. If its basis is an epic quest whether driving the length of the continent, hiking border to border, or biking across Europe, I'm there. If someone wrote a book about setting out to eat at all the Taco Bells in South Dakota, I'd give it a try. Wild Tanuki with its tale of skateboarding the length of Japan seems like it should be a perfect fit. The reality is mixed.

Some of the things I like to read about in a book like this were covered. Among these were the logistics, both the anticipated issues that were planned for and those that weren't (like wearing out shoes fast) along with how the author overcame those roadblocks. I like comparing the area being traversed and the people the author interacts with to my own world and experiences – answering questions like: What things are the same about the people and places and what is different? What parts of the authors experience surprised me?

Last, I'm interested in getting an idea of the author's reaction to the experience. This may be profound, or not, but no one subjects themselves to this kind of trip without coming away with some lessons, even if it is only the realization that they'd never do that again. The author does a good job in the epilogue putting the experience and what he got from it in perspective.

However, there were a couple things that overshadowed the good for me. First is the need for a more through copyediting and proofreading job to shake out the many typos, grammar issues, and unclear sentences that made it into the final version. Second is, well here's an example, edited to hopefully make it past the various censors:

In front of the shrine, I threw 20 cents into a box, rang the bell, and bowed with my hands together while praying for a long life filled with many <instances of being pleased orally>. I’m still in my 20s and that consumes most of my thoughts. It means I’m healthy.

While some may, I don't have an issue with that. I think most people understand that a normal guy in his 20s is probably going to be obsessed with sex. In case they don't remember, a reminder like this is fine. Maybe even a couple of them. However, there comes a point where it's beating a dead horse, telling the reader what they already know and doing nothing to move the story forward. This was especially true in the author's apparent obsession with pleasuring himself, speaking of dead horses. There were also times where the way the story was told, whether explicitly sexual or not, went over the line for me to the point of being offensive, some would say misogynistic. For example at one point he was feeling depressed, didn't know why, but (in so many words) said that he knew it wasn't because he was a woman at a certain point in her cycle.

Maybe I'm a prude. More likely is much of the content had no place in a book of this genre. However, I'm sure some subset of the potential audience would be fine with this. If you're one of them, this review should help point the way.

Too many typos and other copyediting or proofreading misses.