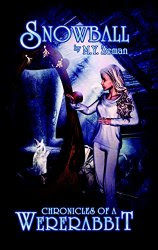 “M. Y. Zeman has a Master's Degree from Stonybrook University and a BA in Mathematics. She followed in her mother's footsteps and became a teacher of computers and math… A lifelong fan of science fiction and fantasy… She currently lives in New York with her dog and three dwarf bunnies and is working on the second book, Snow Bunny.”

“Snow Everly was born a rabbit and believes that her destiny was to die in a cold laboratory. Then one winter night, a vampire named John breaks in searching for his missing research. When the lab goes up in flames he goes back and rescues her. He names her Snowball and has no idea that she is no ordinary rabbit. John's partner, Edgar, tells him that he is now a father but it takes time for John to realize how right he is. When Snow turns three years old, Snow gains the ability to shift into a girl… Follow Snow on her journey as she makes friends with werewolves, a telepathic mouse and searches for answers. Her dream is to one day become a hero and above all else - she wants to be accepted for who she is - a wererabbit.”

Snow Everly feels most comfortable in her bunny form, so when Snow turns six John, John’s partner, Edwin, decide it is time for Snow to start school. It doesn’t go as well as planned. Well over the first half of this story is devoted to character development of this urban fantasy world, John, and Edwin. Ms. Zeman's vampires are unique as are the family dynamics in this tale. John is a First Blood, meaning he is Vampire royalty. HHe suffers from hearing loss from a birth defect. He also is very forgetful, but has a brilliant mind and devotes himself to science. Edwin, has a happy-go-lucky personality. He comes and goes as his adventurous soul pleases. They are both very devoted to Snow.

The plot took way too long to get going in this story. I almost set it aside a few times. It was also hard for me to become involved with the characters. John was aloof, Edwin a bit too happy, and Snow was just an adorable bunny. I had to remind myself this was a children’s story. Most of the evil doings are from humans, which shouldn’t be too surprising. However towards the end a nefarious plot arises and some evil vampires are involved as well as humans. Here the story takes off in a whirlwind as Snow tries to save a young captured werewolf. This is a creative and adventurous story that should captivate any middle-grade student who enjoys fantasy.

The family dynamics of having two dads is subtle and handled well.

I found a small number of proofing errors.