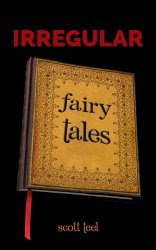 “Scott Teel has worked as a library page, a cigarette cashier, a school landscaper, a paint store gopher, a dishroom employee, an election supervisor, a videographer, and a copywriter and proofreader. He lives in Ithaca, NY.”

“What makes a fairy tale Irregular? Hansel & Gretel’s parents refusing to allow the kids to be adopted by fairies because they disapprove of the fairy lifestyle. Rumplestiltskin teaching a young woman to keep her promises. A prince for Rapunzel who never mastered rope climbing in gym class. Tom Thumb’s mother refusing to allow him to date the one girl his size because she’s Protestant.

Not fairy tales for children - although frequently childish - Irregular Fairy Tales are much more fun than a trip to the ball, and less expensive too, when you consider how much interest Fairy Godmothers are charging these days.”

The stories in Irregular Fairy Tales are loosely based on the fairy tales you're familiar with from childhood. However, they've been updated and twisted into something entirely different. The changes vary. Some are modernized. Some have endings polar opposites of the original. All have a humorous and irreverent attitude to them that adults, especially if you like satire, will find amusing.

Unlike the fairy tales of your youth, the message or “moral” of the story is unclear (I'd say didn't exist in many cases) even though one is explicitly given at the end. Some of those morals were enough to get a final chuckle. For example:

“Don’t hate entire groups of people for no good reason when there are so many good reasons to hate people individually.”

“Just because his name is Charming doesn’t mean that he actually is.”

There were times when the additions and twists seemed to be taking the story down a particular road, trying to make a political statement, but if that was the goal, what that statement was remained unclear to me. So, unlike those fairy tales of yore, these aren't likely to teach you anything (you're an adult who has learned the simple lessons anyway, right?) but they should be good for more than a few laughs.

Some adult language and themes.