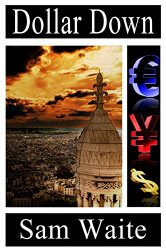 A former Marine, editor in chief of a daily newspaper in Texas, and later spending twenty-five years in Japan where he worked at McKinsey & Company and as the stocks editor at Bloomberg, Sam Waite had a long career as a journalist. In retirement, he's become a novelist and also our newest “pal,” recently joining Books and Pals as a reviewer.

I thought this story from the about the author section of this book, Sam's first novel, was interesting because it was the inspiration for this book.

Sam arrived in Tokyo on his way home [from Taiwan]. It was the day Nixon announced the U.S. would no longer guarantee the sale of gold at thirty-five dollars an ounce. Banks shut down currency trading, because no one knew what a dollar was worth vis a vis gold. No bank would exchange his dollars for yen. He had a plane ticket to the U.S., but needed yen to buy a monorail ticket to the airport. With only minutes to spare to get the last run that would let him catch his plane, a train station employee gave him from his own pocket enough yen coins to buy a ticket. Thus began the end of the Bretton Woods accord that had fixed currency exchange rates since 1945 and the start of his fascination with the global foreign exchange market.

“What began as a simple missing persons case turns into something that could bring down a nation.

Mick Sanchez arrives in Paris to find his client, a global management consultant, has gone missing. A director in the firm hires Sanchez to find the missing client. To his surprise, the director, a beautiful woman, takes more than a professional interest in him. When both she and his client are murdered, he becomes determined to discover why. His investigation leads him to discover a complex conspiracy to destabilize the world’s oil market, undermine the dollar and ultimately alter the balance of power among nations. Before long Sanchez finds himself the target of people he had trusted, in a gambit of seduction and betrayal.”

This is a well written, intense story. If you're a fan of suspense or thriller novels with international intrigue, especially the political or financial thriller sub-genres, Dollar Down should be a great fit. Mick Sanchez is a protagonist who you really want to succeed, even more so when you realize the stakes of him not getting to the bottom of the mystery at the heart of this story and the conspiracy he uncovers in the process.

If your knowledge of the currency markets is limited to what mine was (my Canadian trips are cheaper or more expensive, depending on exchange rate) the critical concepts are doled out as needed in a way that doesn't bog down the story. You might find yourself learning something new without even trying or realizing you're doing so.

A small number of typos or other errors. These are primarily using the word lead instead of led in multiple places and occasionally missing a small word ('a', 'too', etc) or words out of sequence in a sentence.