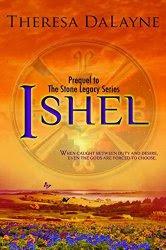 “A long-time enthusiast of things that go bump in the night, Theresa began her writing career as a journalism intern—possibly the least creative writing field out there. After her first semester at a local newspaper, she washed her hands of press releases and feature articles to delve into the whimsical world of fiction.

Since then, Theresa has been married, had three terrific kids, moved to central Ohio, and has been repeatedly guilt-tripped into adopting a menagerie of animals that are now members of the family… Wherever life brings her, Theresa will continue to weave tales of adventure and love with the hope her stories will bring joy and inspiration to her readers.”

To learn more about Ms. DaLayne feel free to visit her website.

“Trapped between duty and desire, even a goddess is forced to choose. When a Mayan goddess, Ishel, falls madly in love, she is left with a choice. Fulfill her royal obligation and marry the god of war, or follow her heart and elope with the deity who has true claim over her heart—Kinich, ruler of the sun.

Determined to have Ishel as his wife, the god of war will stop at no lengths to ensure their betrothal. Left with no other choice, she flees the heavens. But there is more at stake than even a goddess can foresee. An unexpected surprise awaits. One destined to challenge her immortality.

Without the goddess to tend to mankind’s plants and flowers, the middle world will surely perish. And how will she live on to protect the single person who needs her most?”

Ms. DaLayne has created a fascinating tale of star-crossed lovers. Kinich is the god of the sun that shines down on earth to assist Ishel, goddess of flowers, grass, trees, and all things growing. It seems like the perfect combination. Ishel’s father is the god of water and rain that further nurture her plants. Ishel also loves visiting the middleworld and is fascinated by the humans who inhabit that realm. It is Ishel and her father’s job to aid the Stone Guardian when she returns with the ancient stone of Muck’Ich. Knowing that in all of heaven and earth the creator gods chose a mere mortal woman to guard the stone that could change the fate of the world, gave Ishel hope that she could change her fate as well. For her father has chosen Nacon, the god of wrath and war, to be her betrothed. Thinking that he will be able to protect her so she can fulfill her responsibly to the Stone Guardian.

With a broken heart Ishal flees to the middleworld but the plants, crops, and trees continue to wither and die under her father’s deluge of rain. Ms. DaLayne does an excellent job of describing Ishal’s heartache and the affect she is having on the middleworld. Even though Kinich, who she loves with all her heart, is with her. Her father denied her love that has broken her heart and the whole world suffers. It’s a beautiful story with some hard hitting twists that wrenched my heart.

I would highly recommend reading Ishel (The Stone Legacy Series Book 0) before starting the series. Ishel establishes the lore behind The Stone Legacy.

I found no significant proofing or formatting errors.

Email ThisBlogThis!Share to TwitterShare to FacebookShare to Pinterest
Labels: 4 Star, Fantasy, fiction, YA