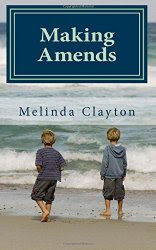 A licensed psychotherapist, this is Clayton's sixth novel. In addition, she's written one non-fiction book and several short stories. In between attending her son's soccer games and writing her own books, Clayton writes for Indies Unlimited and runs her own small publishingcompany. She lives with her husband and sons in Florida.

“On a beautiful fall evening, in the middle of a game of hide-and-seek, five-year-old Bobby Clark is kidnapped by his estranged father, a shiftless man with a history of domestic violence and drug abuse. Bobby’s twin brother Ricky watches, terrified, from his hiding place behind the bougainvillea, while mother Tabby, who also struggles with addiction, lies inebriated on the living room floor.

Bobby isn’t seen by his loved ones again until a fateful morning twenty-five years later, when video of his arrest dominates the morning news. He has been charged with the murder of his father, but before the trial can begin, he manages to escape.

As Tabby and Ricky absorb the news of Bobby’s return and subsequent escape, Tabby is convinced he’ll come home to the quiet Florida street from which he was taken so long ago. But when events begin to spiral out of control, she’s left to wonder: is a child born to be evil, or shaped to be evil? And in the end, when it’s time to make amends, does it really matter?”

On the surface, Making Amends is a suspense novel, with all that implies. The point of view changes from chapter to chapter between three main characters.

Tabby, the mother of two identical twin boys, Ricky and Bobby. Kidnapped by his father when he was five, twenty-five long years ago, Bobby has not been heard from since. Then he's arrested for killing his father. Tabby has always felt guilty about Bobby's kidnapping, thinking she should have prevented it.

The second POV character is Ricky, who has always had ambiguous feelings about Bobby's kidnapping, wondering why their father only took one of them.

Last, Tabby's best friend Von, who has been involved in Tabby's life since before the twins were born. She provides a more realistic point of view, helping temper Tabby's self-recriminating thoughts.

The changing view points are clearly labeled at the start of each chapter and the transitions were easy for me to follow. From the descriptions of the characters above, you might have already gathered that while the story is suspense, the psychological aspects as they struggle with and try to come to terms with their pasts are actually where the best part of the story lies. In the process, it will set your mind reeling with thoughts and questions about responsibility, family and friendship, and the nature of evil.