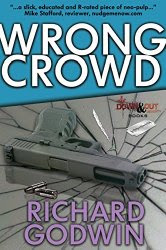 Richard Godwin is a widely published author, with a focus on horror and crime, poet and playwright. He holds a BA and MA in English and American English. He splits his time between the UK and US.

A sultry novel in which an art thief finds himself out of his depth in a criminal maelstrom when he meets a beautiful woman with no past.

When Claude meets Maxine in the Caribbean he falls for her. He does not expect he will start an affair with her back in London, then again he does not expect to have to call on the help of his old mate Spike, nor that they will become embroiled with Russian gangsters Vladimir and Grigory.

But then Claude will do anything to hold onto Maxine. Peopled with thieves, hustlers, gangsters, gun runners and pimps, Wrong Crowd is a slick and action-packed ride into London’s low-life.
Appraisal:

This is a languid tale of deception, jealousy and murder. The novel opens with Claude, not the best looking guy in the world, falling for Maxine, who’s a beauty. He doesn’t understand why, perhaps it’s because Claude appears to be a wealthy man. After a brief, powerful holiday affair the pair returns to London. Pretty quickly we realise Claude is not what he seems. However, neither is Maxine.

When the pair return to London they carry on their affair, but first Claude must bolster the outward pretense of wealth. Claude was in the Caribbean spending some ill-gotten gains, the trouble is the cash is running out quickly.

One of the elements Godwin achieves very well with all of his work is the steady ratcheting up of tension. An earlier piece of work, One Lost Summer, is a particularly strong example. In Wrong Crowd the author achieves a similar effect, pulling back the cloth to reveal the frailties of his main characters. The criminal element, school friend Spike and Russian Grigory, also cast a long shadow over the tale, revealing more of Maxine’s intentions. The losers in Wrong Crowd are many and dealt with in brutal fashion, where one person will do anything they have to in order to have what they most desire.

Plenty of swearing and violence.

One of the things I really enjoy about self-publishing is that the author can write to any length they like. But it does mean that to give a proper flavour of the compass of a book, one needs the proper length of it. I wondered how a psychological thriller was going to do its thing in 30-35,000 words - and lo, when I went to download my customary sample and had a look at the number of print pages, those are given as 219. So not a short novella after all: this is something much more substantial. It is helpful to know this :-)

I do the word counts by converting the ebook file into an RTF file, opening in Word (actually I use Open Office now) and doing a word count for the contents of the actual book excluding front and back matter. I'm not beyond making mistakes so I just double checked and the word count it gave me was33,000 and change. The print book is listed on Amazon as 198 pages. I believe that would include front and back matter, although if the ebook is any indication, there isn't too much of that. However, depending on font and other formatting choices the number of words in a print book with X pages can vary a lot.